SEOUL, Dec. 31 (Yonhap) -- The leader of the center-left People's Party garnered overwhelming support from its members for his push for a merger with a minor conservative party, the party announced Sunday.

The election committee of the party said 74.6 percent of members who participated in last week's internal vote supported Ahn Cheol-soo and his proposal to unite the country's third-largest party with the center-right Bareun Party.

The poll was conducted from Wednesday to Saturday via phone and online. Turnout was 23 percent, with 59,911 out of a total 260,437 members taking part in the vote. The panel said 25.4 percent opposed Ahn.

Ahn on Dec. 20 proposed the vote on the merger aimed at beefing up the centrist forces ahead of local elections slated for next June. Ahn had pledged to resign if he lost the vote.

After the announcement, the former presidential candidate vowed to push for the merger swiftly.

"I received overwhelming support from the members of the People's Party," Ahn said in a news conference.

"I will accept the party members' will expressed in the vote as their aspiration for change. I will look no other way and will move forward on the path of integration," he said. 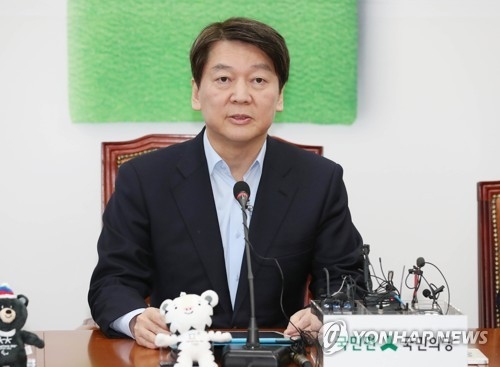 Ahn's rivals in the party called the vote invalid, citing low turnout. They said Ahn failed to win the vote and should step down as he promised.

"This is a clear indication of a vote of nonconfidence for Ahn," a group of 18 lawmakers said in a press conference. They launched their own group to oust Ahn and block what they called a conservative collusion.

The dissenters are largely based in the southwestern region, which has been traditionally opposed to rightist politicians. A merger with the conservative Bareun Party would dent their prospects in future elections, including the June gubernatorial and mayoral elections.

The lower turnout is far below the quorum of a third of members required by the party constitution to determine crucial issues, such as a merger with other parties.

The poll led by Ahn's faction was not directly about the merger plan but questioned whether or not the respondents support Ahn who pushes for the merger.

Ahn's side pointed out that the voter ratio was close to the 24.26 percent turnout of the last party election in August, in which Ahn was picked chairman.

Earlier in the day, a man barged into the party's headquarters and attacked Rep. Lee Dong-seop, chief of the election committee, when he was announcing the vote result. The man kicked the podium with his leg and got into a tussle with party officials. He was taken into police custody later.

The integration of the two parties has been seen as a strategy to combine the centrist political force to counterbalance the two major parties -- the ruling Democratic Party with 121 seats and the main opposition Liberty Korea Party with 116 seats in the 299-member National Assembly.

The People's Party holds 39 seats, while the Bareun Party has 11 lawmakers. 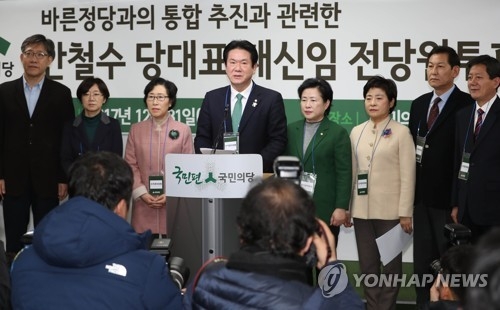