The KFA said Jang played till full time in 12 matches this year. The only match he didn't play until the final whistle was in the final Asian World Cup qualifying match against Uzbekistan in September, when he was substituted out just 43 minutes after kickoff due to injury.

Jang, 26, also made the most appearances for the Taeguk Warriors in 2016 after playing 728 minutes in nine matches that year.

The KFA said 50 footballers played at least one match for the national team in 2017 and nine players made their international debuts. 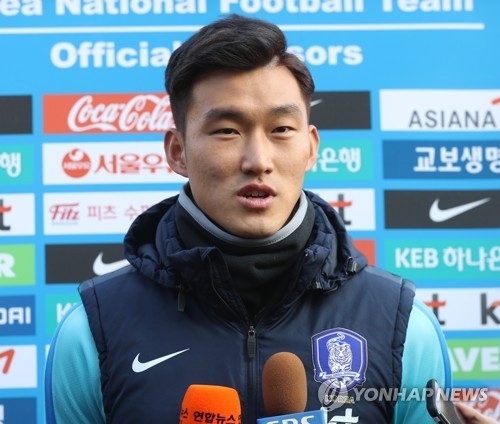 South Korea posted a record of four wins, five draws and four losses in 2017. They scored and conceded 16 goals.

Jeonbuk's Lee, besides being the reigning South Korean pro football league MVP, was the top assist maker, with three helpers. He was followed by Crystal Palace midfielder Lee Chung-yong with two assists.

The KFA said South Korea made 162 shots in 13 matches. They made the most attempts in their 2-2 draw against China at the EAFF E-1 Football Championship, with 18 strikes. On the other hand, South Korea allowed 21 shots to Morocco in a friendly match in October in Switzerland, where they suffered a 3-1 defeat.

Hardworking defender makes most appearances for nat'l football team in 2017

Hardworking defender makes most appearances for nat'l football team in 2017