According to the Paris-based organization, the country's recurrent taxes on immovables reached 0.80 percent of its economy in 2017.

This placed it the 16th highest among 31 countries that were checked and below the 0.91 percent average for other developed market economies with high incomes.

The latest findings showed that South Korea's tax rates on property were on par with the OECD average between 2007 and 2008.

Among countries examined Britain had the highest property tax rate at 3.11 percent, followed by Canada and France with 3.06 percent and 2.65 percent, respectively. The United States and Israel made the top-five list, while the small European state of Luxemburg had the lowest tax rate at 0.07 percent.

The data showed that in the late 1990s and early 2000s Asia's fourth-largest economy ranked at around 19th place, but this rose during former President Roh Moo-hyun's term in office, with the country's standing peaking at 13th in 2007, before generally dropping in the following years to backtrack to 21st place in 2013 through 2014 and 19th in 2015.

The rise in ranking is attributed to Seoul starting to levy the comprehensive real estate holding tax starting in 2005.

The latest findings, meanwhile, could open the door for the incumbent Moon Jae-in administration to reintroduce tougher real estate tax laws that can be used to control rising home prices and curb speculation. Rising real estate prices have been cited as one of the reasons for South Korea's high household debt that hovers over 1,400 trillion won (US$1.31 trillion) at present. 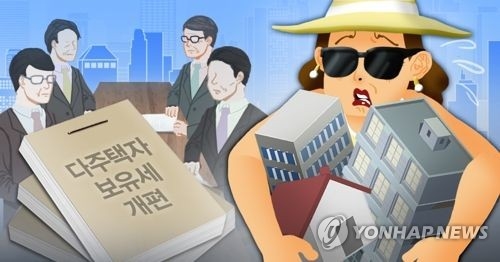