Outbound shipments came to $573.9 billion for 2017, up from $495.4 billion a year earlier, according to data compiled by the Ministry of Trade, Industry and Energy, and the Korea Customs Service.

The total is the largest annual export tally since the country started compiling such data in 1956.

The daily average exports reached a near record high of $2.1 billion last year, with South Korean products taking up 3.6 percent in the global market to become the sixth-largest exporting country in the world.

South Korea's trade surplus came to $95.8 billion, up from $89.2 billion the year before, the ministry said.

Exports of machinery rose 10.2 percent to hit a record $48.7 billion, while those of oil products and steel products jumped 23.5 percent and 20 percent, respectively.

Shipments of displays and vehicles also gained 9.1 percent and 3.9 percent, respectively, to lend support to the exports rally last year.

Meanwhile, exports of wireless devices slumped 25.5 percent and those of home appliances 22.5 percent due to contracted world demand.

By region, exports to China rose to $13.8 billion last year, accounting for 24.8 percent of the country's total exports, down slightly from a 25.1 percent share in 2016.

Exports to the United States, the country's second-largest trade partner, added 3.2 percent on-year, but South Korea's trade surplus tumbled 22.7 percent to $18 billion due to an increase in imports of natural gas and machinery.

For the month of December, South Korea's exports rose 8.9 percent on-year to $49.1 billion to extend the rally to the 14th consecutive month. 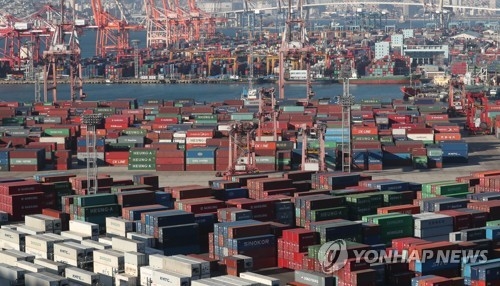