SEOUL, Jan. 1 (Yonhap) -- North Korea has welcomed the new year with massive fireworks at an annual gala initiated by its leader Kim Jong-un.

The display of the big fireworks was set off at midnight Sunday along the Taedong River near the Kim Il-sung Square and the Tower of Juche Idea in Pyongyang, where people thronged to watch the grand view. Juche means self-reliance.

But leader Kim did not appear on the TV, and the broadcaster also did not mention the names of other political and military leaders.

The big fireworks, which began in 2013, two years after Kim became the North's leader, is reportedly designed to brighten up the social mood and boost people's confidence. 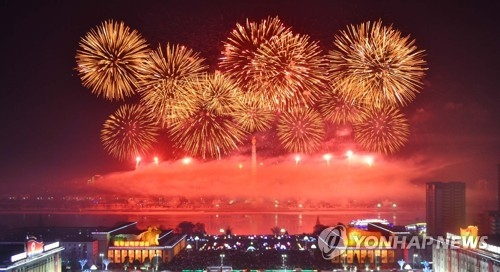