SEOUL, Jan. 1 (Yonhap) -- President Moon Jae-in on Sunday welcomed the new year with a mountain hike with a group of six citizens who have been picked as righteous persons for the year 2017 for their good deeds.

Moon and the citizens, including Park Jeong-hyon, hiked up Mount Bukhan, located behind the presidential office, for about three hours and watched the New Year's Day sunrise. Park was recognized for saving a woman from sexual assualt, and was stabbed in the abdomen by the assailant.

They had breakfast with Moon's chief secretaries at the presidential office Cheong Wa Dae afterward. 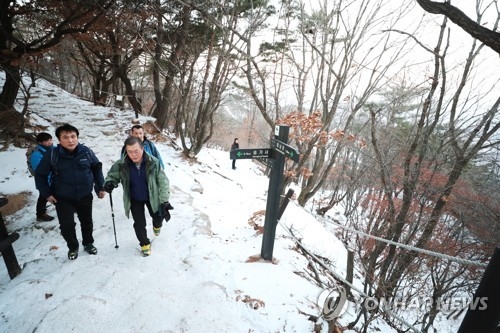 He is also scheduled to invite leaders from every social sector, including business tycoons, to his office to exchange greetings Monday.
(END)