SEOUL, Jan. 1 (Yonhap) -- The new passenger terminal at Incheon International Airport will be unveiled to the public for the first time next week ahead of its official start of operations, its operator said Monday.

The Incheon International Airport Corp. (IIAC) plans to hold a pre-opening event for the 384,336-square-meter second terminal built on Yeongjongdo Island, 60 kilometers west of Seoul, on Jan. 12. It has spent 4.9 trillion won (US$4.6 billion) on the massive building project.

The five-story new terminal will formally begin operations Jan. 18, with a Seoul-bound Korean Air flight from New York slated to be the first to make use of the facilities after landing at South Korea's main air passenger hub at 5:15 a.m. Another Korean Air plane en route to Manila on the same day will be the first plane to take on passengers from the terminal before takeoff.

The new terminal has been designed largely to enhance user convenience. It can handle some 18 million passengers per year, enabling Incheon airport, which lies some 60 kilometers west of Seoul, to process 72 million passengers and 5 million tons of cargo every year, in conjunction with the existing terminal.

The terminal will also handle athletes and sports officials arriving in the country for the 2018 PyeongChang Winter Olympics that kicks off Feb. 9. 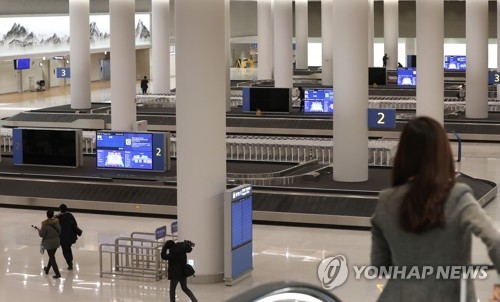