SEOUL, Jan. 1 (Yonhap) -- The cumulative number of moviegoers in South Korea reached a record high of nearly 220 million last year on the back of success in large-scale Korean films, industry data showed Monday.

The figure came to 219.8 million at the end of December, up by 2.84 million from a year earlier, according to the data by the Korean Film Council.

The annual attendance tally had been stalled at around the 210 million mark for the past five years, with the number recording a slight downtrend in 2016 before it rebounded last year.

The market share of Korean movies stood at 53 percent as of end-2017, continuing their streak of controlling a majority stake for seven straight years.

Observers had forecast the 2017 audience tally to stay about the same as that of the previous year or log a marginal on-year drop. But good receptions for a series of big Korean-made movies, such as "Steel Rain," "Along With the Gods: The Two Worlds" and "1987," helped drive up the numbers, they said.

"Along With the Gods," a fantasy about guardians of death and the afterlife, has sold 9 million tickets into its 13th day of screening as of Monday. "1987: When the Day Comes" -- a historical drama film depicting true events that occurred during the democracy movement in South Korea, which toppled the military rule of the Chun Doo-hwan government -- has recorded 2 million in its sixth day. The thriller "Steel Rain" has attracted 4 million moviegoers. 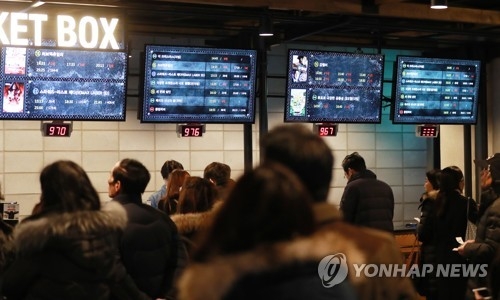