A total of 9.07 million passengers used international and domestic flights in November, up 9 percent from a year ago, the Ministry of Land, Infrastructure and Transportation said.

The number of travelers flying to and from Japan, Europe and Southeast Asian nations posted double-digit growth, but passengers using the China-Korea route plunged 22.3 percent in November to mark nine straight months of decline.

The number of Chinese visitors had been falling throughout last year due to the Beijing government's ban on group tours heading to South Korea in retaliation for Seoul's decision on the U.S.-led missile shield.

But the pace of decline has slowed to below the 30 percent level since it plunged 45.5 percent on-year in July. The two governments agreed to normalize relations in October. 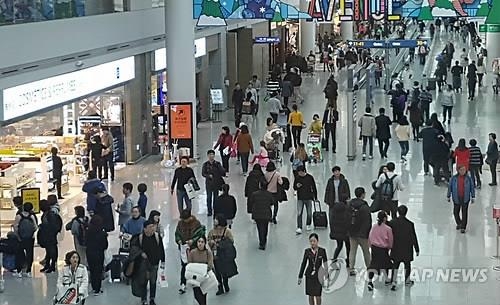 Air passenger traffic in S. Korea up 9 pct in Nov.

Air passenger traffic in S. Korea up 9 pct in Nov.