SEOUL, Jan. 1 (Yonhap) -- Former President Lee Myung-bak on Monday denied allegations that his government had signed a dual contract with the United Arab Emirates in relation to South Korea's exports of nuclear reactors to the Middle East nation while showing a cynical attitude toward the incumbent government.

Rumors have circulated that corruption was involved in the 2009 deal via a double contract, and the floor leader of the main opposition Liberty Korea Party recently raised suspicions the UAE has strongly criticized the Moon Jae-in government for spreading such corruption allegations.

"There was no double contract," Lee said during a meeting with reporters at his residence in Seoul.

On the controversy over presidential Chief of Staff Im Jong-seok's recent visit to the UAE, Lee said, "(Im) might have made the visit as there had been an urgent business. I can't talk about it anymore."

Rumors have suggested that Im hurriedly traveled to the UAE early last month to mitigate its concerns about the possible impact of Moon's nuclear phase-out policy on the 2009 deal, under which South Korea is currently building four reactors there. But Moon's office dismissed the allegations, saying Im's trip was to improve bilateral ties and encourage a South Korean military contingent stationed there.

"I think the Moon government will properly manage (the situation) as it has vowed to do so," Lee said. 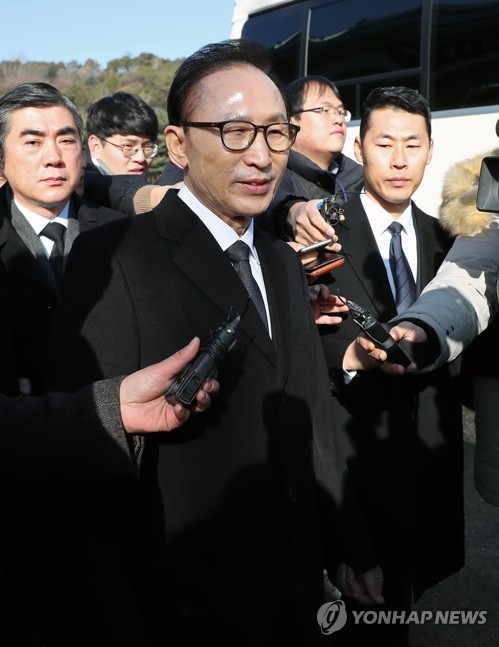 The former president also said Khaldoon Khalifa Al Mubarak, the chairman of the Executive Affairs Authority of Abu Dhabi, who is to visit Seoul early this year, is an "influential figure."

Asked whether the chairman's visit is instrumental to addressing the alleged uneasy situation, Lee said, "Nobody can guess."

Lee is in discord with the incumbent government, as the prosecution is looking into suspicions that DAS, an auto parts maker has run a secret fund worth 12 billion won (US$11 million) under dozens of borrowed names. Lee is alleged to be the real owner of the company.
(END)