The benchmark KOSPI ended 2017 up 21.76 percent from a year ago. The increase is 15.5 times the 1.4 percent annual interest rate for a time deposit at a bank, according to the data.

The index for the secondary KOSDAQ jumped 26.44 percent.

Those who had opted for bank deposits or bonds fell far behind in their investment returns. Bonds investment recorded a 0.6 percent profit last year. 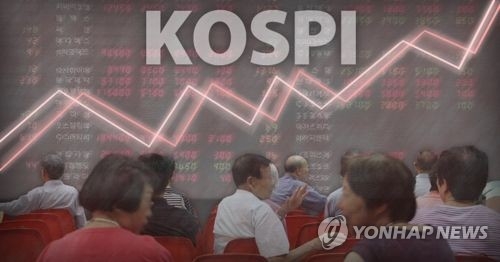 Investment in the greenback also backfired as the dollar shed nearly 11 percent against the local currency.

The real estate market was sluggish as well, with the average price of apartments nationwide rising 1.38 percent last year as of Dec. 25. Prices for more expensive units in Seoul were up an average 5.63 percent.

"The global stock market does not look bad in the new year," he said, adding that gold investment may also be worthy in the long haul.

Shin Dong-il of Kookmin Bank's private banking center in Seoul said the stock market appears to be in good shape for at least the first half of the year.

"Because the won-dollar exchange rate has fallen a great deal, buying the dollar and investing in dollar-based equity-linked securities or foreign funds may be good tools."
(END)