SEOUL, Jan. 2 (Yonhap) -- President Moon Jae-in made a customary visit to the National Cemetery on Tuesday that also marked the first day of his official duty in new year.

The president was accompanied by a number of top government officials and other political leaders, including Prime Minister Lee Nak-yon and presidential chief of staff Im Jong-seok. 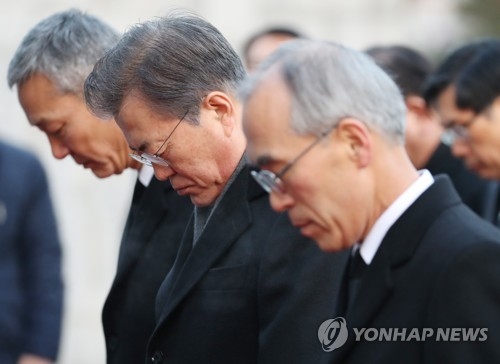 The brief visit came before the president began his official duty at 9 a.m. His first official duty was a weekly Cabinet meeting held at his office Cheong Wa Dae.

"A nation of people. Will prepare for the 100th anniversary of national foundation," the president wrote in the visitor log, according to Cheong Wa Dae pool reports.

Moon was later set to host a lunch to mark the start of the new year. It was expected to be attended by some 200 people, including political and business leaders, and civic activists.