SEOUL, Jan. 2 (Yonhap) -- The local price of dried laver soared 14 percent in December from a year ago as large portions of it were exported while the domestic supply shrank from severe drought, agro-fishery data showed Tuesday.

According to the data from the Korea Agro-Fisheries & Food Trade Corp. (aT), the price of the seaweed, measured by a pack of 100 sheets, was 9,178 won (US$8.59) on average last month, up 14.1 percent from the same month of the previous year. This is the highest price since 1996 when aT began to keep track.

Sources at distribution outlets said exports of the product spiked up the prices. Shipments of dried laver last year totaled 20,000 tons for a record high of $500 million. The volume is an eight-fold jump from 10 years ago, with export destinations now reaching 109 countries.

Chronic chlorosis in South Chungcheong Province, where about 13 percent of dried laver is produced, also drove up the prices. The province was hit by a heavy drought last year, worsening the production capacity, according to the officials. 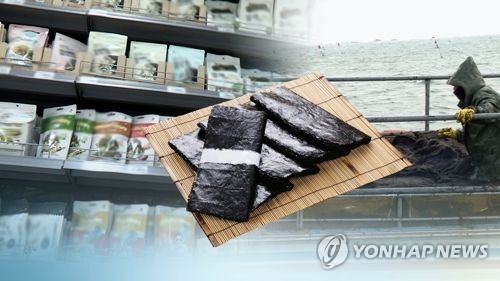