SEOUL, Jan. 2 (Yonhap) -- A hike in the base rate by the South Korean central bank is expected to increase funding costs of local businesses, a report said Tuesday, amid the recent trend of monetary normalization.

According to the report published by the Korea Institute of Finance (KIF), if the Bank of Korea (BOK) raises the key rate by one percent point, borrowing costs of Korean companies will double.

The study is based on quarterly corporate earnings report of listed companies between 2005 and 2017, the report added.

As a result, businesses can become more reluctant to raise funds through issuing corporate debts or borrowing money from local lenders due to concerns of increased borrowing costs.

In particular, small and medium enterprises are expected to be hit the hardest by the rate hike compared to larger companies and will have to scale back loans from banks, who tend to lend money to higher-credit big names, said the KIF.

In November last year, the BOK raised the key rate to 1.5 percent from a record low of 1.25 percent for the first time in more than six years as part of its plan of monetary accommodation. 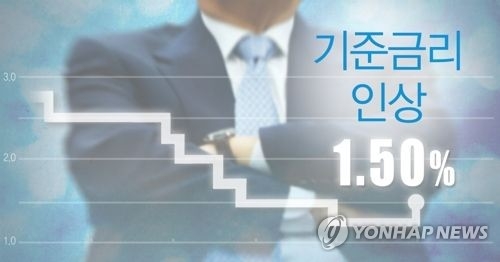