SEOUL, Jan. 2 (Yonhap) -- South Korean football chief Chung Mong-kyu said Tuesday he is ready to give the best support for the men's national team to reach the knockout stage at the 2018 FIFA World Cup.

In his new year message, Korea Football Association (KFA) President Chung Mong-gyu said that the national football governing body will not hesitate to support the national team at international competitions.

"Last year, the KFA received heavy criticism and we understand people's demand and judgment," Chung said. "We'll do our best for the national team to reach the round of 16 at the World Cup in Russia."

South Korea are paired with defending champions Germany, Central American powerhouses Mexico and European dark horses Sweden in Group F at the 2018 World Cup that kicks off in June.

Chung said the KFA will also work on making a healthy environment for youth football with new executives. The KFA had a personnel reshuffle in November that appointed former Manchester United midfielder Park Ji-sung as youth football program director.

"Our young and talented executives will start their work this year and they will make a strong environment for our youth footballers," he said. "We will prepare for eight-on-eight football to be played in elementary schools in 2019."

Chung also vowed that the KFA will try to get the number of registered footballers in South Korea to top 200,000 this year. Currently some 110,000 are registered in its database.

The 55-year-old executive said the KFA will also push its plans to build a new football training facility in addition to the National Football Center in Paju, Gyeonggi Province, that was constructed in 2001. 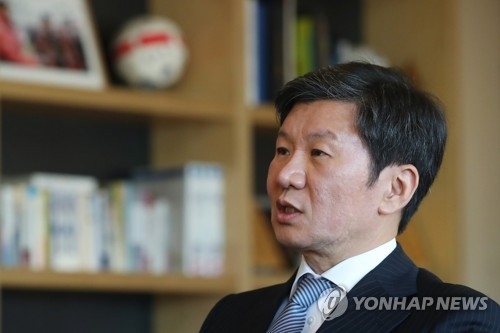