SEOUL, Jan. 2 (Yonhap) -- President Moon Jae-in called for swift measures to realize North Korea's participation in the PyeongChang Winter Olympic Games here on Tuesday, one day after the reclusive North Korean leader hinted at a resumption of inter-Korean dialogue to the end.

"I hope the Unification Ministry and the Ministry of Culture and Sports will swiftly come up with follow-up measures to quickly restore South-North Korean dialogue and realize the North Korean delegation's participation in the PyeongChang Olympics," the president said in a Cabinet meeting held at his office Cheong Wa Dae. 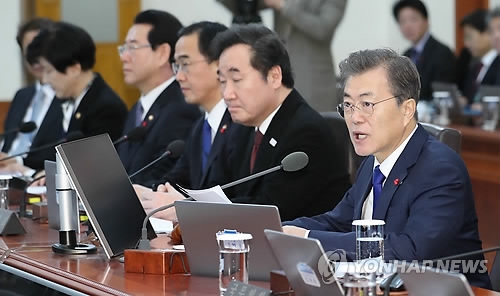 The remarks came one day after North Korean leader Kim Jong-un said his country was willing to send a delegation to the Winter Olympic Games to be held here on Feb. 9-25.

"We are ready to take various steps, including the dispatch of the delegation. To this end, the two Koreas can immediately meet," Kim said in a new year's message reported by the North's state media.

Moon welcomed the remarks as a response to his earlier call to establish peace.

"I view chairman Kim Jong-un's remarks about sending a North Korean delegation to the PyeongChang Olympics and holding government-level dialogue as a response to our proposal to turn the PyeongChang Olympic Games into a groundbreaking chance to improve South-North relations and establish peace," the president said, according to Cheong Wa Dae pool reports.

The dialogue between the governments of the divided Koreas, if held, will be the first of their kind in more than two years.

The last government-level dialogue between the two Koreas was held in December 2015. The new South Korean president proposed holding military and Red Cross talks in July, two months after he took office in May, but Pyongyang had remained completely silent.

Still, the president also stressed the need to closely coordinate his country's future steps with its allies and other nations, saying any improvement in inter-Korean ties must work to help resolve the North Korean nuclear issue.

"An improvement in inter-Korean relations may not go a separate way from (efforts) to resolve the North Korean nuclear issue, so I ask the foreign ministry to closely consult with our allies and the international community so that we may push for an improvement in inter-Korean relationship and the resolution of the North Korean nuclear issue at the same time," he said.