SEOUL, Jan. 2 (Yonhap) -- South Korea's economy was propelled by brisk exports in 2017, but it faces daunting challenges this year to keep the momentum going as trade talks with the world's two biggest economies -- the United States and China -- loom in the face of rising protectionism trends.

South Korea's exports rose 15.8 percent to reach an all-time high of $573.9 billion last year, with a trade surplus of $95.8 billion, led by an upturn in global demand for goods and the memory chip boom.

Asia's fourth-largest economy logged a trade surplus of $18 billion with the U.S. in 2017, but it dropped 22.7 percent from a year earlier with sluggish auto sales and Seoul's increased energy purchase. It fell below $20 billion for the first time since a bilateral free trade agreement (FTA) was implemented in 2012.

Still, the large trade surplus may be an eyesore to U.S. President Donald Trump, who has called for better trade terms with South Korea. 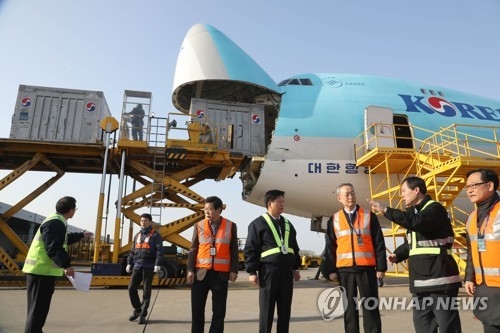 With the first round of talks slated for Friday in Washington, Seoul officials expected American negotiators to raise pressure on the manufacturing sector, especially in the auto and steel sectors.

"There is a possibility that the U.S. could demand abolishing remaining tariffs on goods and adjusting duties on major items to resolve the trade imbalance between the two nations," the Ministry of Trade, Industry and Energy said in a report submitted to the parliament on Dec. 18. "(The U.S) is especially interested in improving market access in auto parts, such as lowering non-tariff barriers."

The ministry said the two sides are expected to negotiate a wide range of issues, including merchandise, service, investment, source of origin and non-tariff regulations, at the negotiating table.

In the farming sector, the government has stressed there won't be an additional opening of the agriculture sector in order to protect the local industry that has suffered damage from cheap imports of beef and fruits. But experts are worried that the U.S. could use this as leverage to extract gains in other business areas.

"In the upcoming negotiations, we plan to push for the inclusion of our issues of interest with the aim of enhancing mutual reciprocity and achieving a balance of interests," the ministry said.

The inaugural talk comes at a time when the U.S. is pushing for a series of protective trade measures, including safeguard actions on Korean washers and anti-dumping duties on steel and chemical products.

The U.S. Commerce Department is expected to release "Section 232" investigations on steel and aluminum on national security grounds, which could lead to broad tariffs or quotas on imports from China and South Korea.

In November, the U.S. International Trade Commission recommended a 50 percent tariff rate on large residential washers built by Samsung and LG, and exceeding a quota of 1.2 million units.

If Trump approves the safeguard measures triggered by U.S. company Whirlpool, it will be the first such action since 2002, when the George Bush administration imposed an 8-30 percent duty on imported steel.

At the same time, South Korea is stepping up preparations to launch FTA negotiations with China to include the service and investment sectors, and expand the scope of the trade deal, which took effect in December 2015. 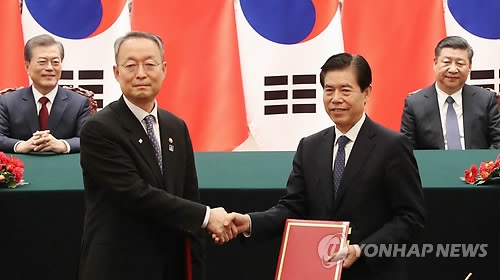 Seoul officials have expressed hope that a high-level market opening in the service sector and investment would boost chances for local companies in entertainment, education and medical sectors in the world's second-largest service market.

As a precondition, local companies have urged the government to come up with additional measures to protect Korean companies from regulations and unfair business practices.

Last year, South Korean retailers and automakers suffered from weak sales and unfavorable sentiment in China over Seoul's deployment of an American missile system, which has soured two-way relations and triggered a boycott on South Korean-made goods.

Provincial Chinese governments also banned the sale of group tours to Seoul, seen as retaliation against the installation of a Terminal High Altitude Area Defense (THAAD) battery. The move has dealt a harsh blow to local duty-free shops as Chinese tourists were their main customers.

Ahead of the start of talks, the ministry plans to hold a public hearing on the proposed FTA negotiations Friday in Seoul to collect opinions from different stakeholders.

Seoul officials have also vowed to extend support for chemical companies, which have been under anti-dumping probes by the Chinese government.

Beijing has begun its investigations into the three petrochemical makers at the request of Chinese petrochemical companies, which claim cheap imports from South Korea and other countries are hurting the domestic industry.

In a meeting of trade remedy officials last month, Seoul called on Beijing to carry out its ongoing anti-dumping investigations into South Korean chemical products in a fair manner and agreed to establish a civilian consultative body on trade remedies and trade policy tools.

To deal with rising protectionism among major trading partners, the trade ministry vowed to cultivate new promising markets and forge new trade pacts to lower barriers in developing economies to keep the growth momentum alive for the export-led economy.

"We will adopt proactive measures to counter potential downside risks to keep up the upward trend," Paik Un-gyu, minister of trade, industry and energy, said during his visit to Incheon International Airport on Monday.