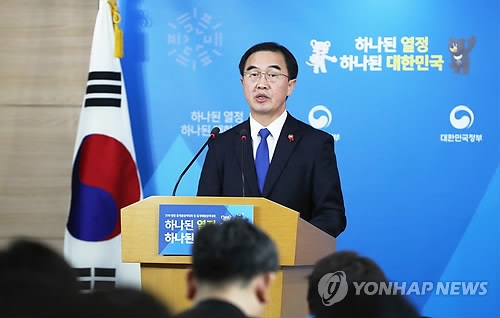 In a New Year's speech on Monday, Kim said that Pyongyang is open to dialogue with Seoul, expressing its willingness to take part in the Winter Games to be held in South Korea on Feb. 9-25.

Kim's surprise offer came as the South is pinning hopes on the North's participation in the games because it believes that the move could help ease tensions on the Korean Peninsula.

If held, it would mark the first inter-Korean talks since December 2015.

The minister said that the upcoming talks would focus on the Olympic participation, but Seoul hopes that they could pave the way for the resumption of inter-Korean talks and the improvement of long-stalled ties.

He did not clarify whether North Korea's denuclearization will be discussed during the talks, saying that various issues of concern could be dealt with when both sides sit down.

In July, the South proposed to hold military talks on easing border tensions and dialogue for holding reunions of families separated by the 1950-53 Korean War. But the North snubbed such proposals.

"We think that the suspended inter-Korean communication channels should be immediately restored. We propose that the two Koreas discuss details of talks including agenda items and the composition of delegations through the channel at the truce village," Cho said. "We look forward to the North's positive response to this."

Seoul's unification ministry in charge of inter-Korean affairs said that the North did not respond to a contact attempt by a South Korean liaison official at the truce village. 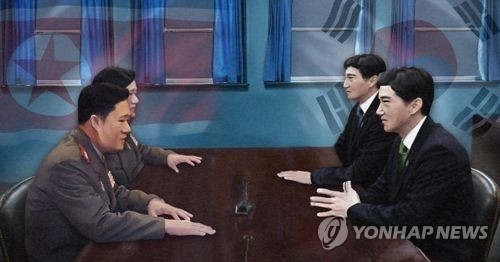 Liberal President Moon Jae-in hopes to seek engagement with North Korea, but Seoul is currently focusing on pressure and sanctions on the wayward regime due to the North's defiant pursuit of nuclear and missile programs.

The U.S. is staging the campaign of "maximum pressure and sanctions" on the North, stressing the need for Pyongyang's denuclearization.

Moon earlier proposed that Seoul and Washington postpone their joint military drills that could coincide with the PyeongChang Olympics or the following Paralympics. The North has long denounced them as a war rehearsal.

Cho said that the allies are keeping close coordination as to Seoul's move for inter-Korean talks.

Experts said that Kim apparently indicated the suspension of the military exercises and the halt to Washington's regular deployment of strategic assets to the Korean Peninsula as conditions for talks.

"The militaries of the allies will make a decision on the matter after taking into account various factors," the minister said, without elaborating.