In a meeting for the new year with more than 200 leaders of various sectors, the president laid out two main objectives of the administration in the new year -- peace on the peninsula and public safety.

"One is peace on the Korean Peninsula. Fortunately, North Korea's chairman Kim Jong-un has expressed his willingness to send a North Korean delegation to the PyeongChang Olympic Games and hold government-level dialogue in his New Year's message," the president said at the meeting with political, government and economic leaders, as well as union and civic activists at his office Cheong Wa Dae.

"We will do our utmost in close cooperation with the international community to turn the PyeongChang Olympics into a peace Olympics, while also making sure (the dialogue) will lead to the establishment of peace between the South and North Korea, and the resolution of the North Korean nuclear issue," he said.

The second objective was to enhance public safety.

"We will do our utmost so the nation, the government will be a shield, an umbrella for the people," he said.

The president stressed the country made some great achievements in 2017, noting the country's trade volume reached a record high to become the world's sixth largest.

"All this resulted from the sweat shed by our people. As president, I express my deep respect and appreciation to each and every one of our people," he said at his office Cheong Wa Dae. 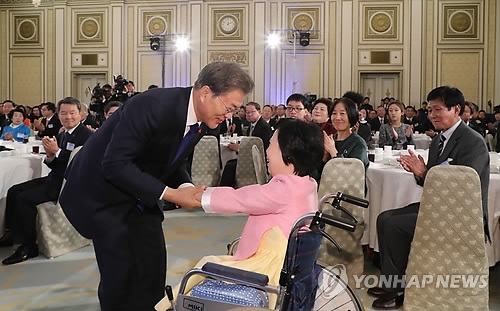 Despite such accomplishments, the president said the people appear not to sense the change they brought yet.

"Right now, the people are thinking, 'The country is changing, but will my life change too?' This year, the government will make all-out efforts to make sure the people will feel that their own lives have improved as the country changes," he said.

"Especially, the government will realize crucial changes in reducing polarization by focusing on the creation of new jobs and narrowing the gaps," the president added.

Such efforts, however, will require concessions from all sides, he noted.

"Should we all yield a little, share our burdens and put our minds together, we may all move a step closer to a better Republic of Korea where all will be better off," he said, referring to the country by its official name.

He also called for cooperation from the political circle.