SEOUL, Jan. 2 (Yonhap) -- The real owners of two foreign tankers that have been seized in South Korea for allegedly transferring oil products to North Korea in breach of U.N. sanctions turn out to be Chinese shipping companies, a U.S. broadcaster reported Tuesday.

South Korean authorities captured the Hong Kong-flagged Lighthouse Winmore on Nov. 24 and Panama-flagged KOTI on Dec. 21, both suspected of making ship-to-ship transactions of petroleum products with the North, in accordance with U.N. resolutions against the North's nuclear and ICBM tests. Their probes are ongoing.

The Resolution 2375, adopted in September, bans member countries from ship-to-ship transfers of any goods for North Korea. Resolution 2397, adopted just a week earlier, allows a country to capture and look into a vessel suspected of engaging in prohibited activities with North Korea. 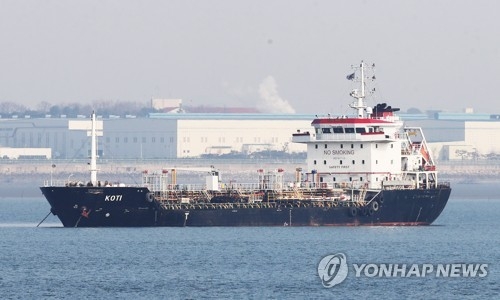 The owner of the 5,100-ton KOTI, detained at the South's Pyeongtaek-Dangjin port, is the Dalian Grand Ocean Shipping Management Co., based in the Chinese city of Dalian, Liaoning Province, Voice of America said, citing data from the Asia-Pacific Port State Control (PSC).

The company's fax and telephone also use the Chinese national code number, 86, the broadcaster said, adding that the PSC data provides basic information on each ship's owner, address, and telephone and fax numbers.

The owner of the Lighthouse Winmore, held at the South's Yeosu port since Nov. 24, is Lighthouse Ship Management, headquartered in the Chinese city of Guangzhou, Guangdong Province, according to the broadcaster.

The Lighthouse Winmore is suspected of transferring 600 tons of refined petroleum to a North Korean ship named Samjong No. 2 in international waters in the East China Sea.
(END)