SEOUL, Jan. 3 (Yonhap) -- Since the last constitutional revision in 1987, South Korea's democracy has made strides in a way implausible under past authoritarian governments, which tweaked the basic law arbitrarily to consolidate or extend their grip on power.

No presidents have since attempted to stay in power beyond their statutory single, five-year term. Citizens have engaged in direct, free polls for the top elected office. The parliament has served to keep the government in check.

Yet, the "1987 system" has been increasingly losing its relevance, as it fails to embrace the social, economic and political changes that have transpired over the past generation -- a reason why those in political circles seek a broad amendment as early as this year.

While politicians are in raucous debate, citizens are also paying keener attention to the issue. Many hope that an amendment will forge better state governance, promote civil, labor and women's rights, and undergird social and political pluralism. 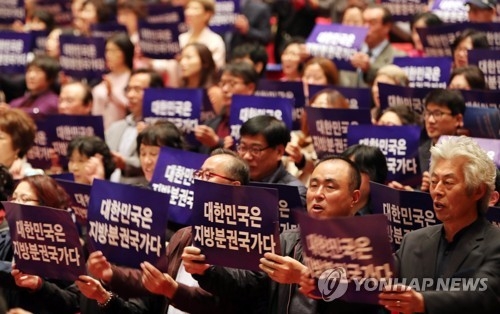 "Under the 1987 system, I believe, South Korea's procedural democracy has been largely completed, as evidenced by the peaceful transitions of government over the past decades," Park Geun-il, a 41-year-old office worker in Seoul, told Yonhap News Agency.

"Now, we need to reorganize the Constitution to create a governance structure that guarantees a more stable, responsible management of state affairs and underpins growing diversity and pluralism and strengthens regional autonomy," he added.

The 1987 charter was born out of a pro-democracy uprising triggered by then general-turned-President Chun Doo-hwan's rejection of public demands for constitutional reform to allow direct presidential elections.

At the core of the amendment were a single, five-year presidential term, direct voting for the head of state, the abolition of the presidential authority to dissolve the National Assembly and the reinstatement of the parliament's right to audit the government.

Under the system, experts said, South Korea has passed the "two turnover" test, widely used to gauge whether a nascent democracy has matured. Late American political scientist Samuel P. Huntington claimed that a new democracy is considered consolidated only after it has undergone two peaceful electoral transitions of government.

Though much credit is given to the 1987 system for democratic advances, citizens say that the country can no longer put off a revision, particularly to address the current concentration of powers in a single state leader, which has long been blamed for power abuses, corruption and political polarization.

A recent Research & Research survey, commissioned by the local daily Dong-A Ilbo, showed 72.3 percent of citizens recognized the need for a constitutional revision, while 13.2 percent said there was no need for it.

Also in the survey, 81.2 percent of the respondents said that a public referendum on the revision must be held within President Moon Jae-in's five-year term, due to end in May 2022, while 27 percent favored a plebiscite to be held in tandem with the local elections slated for June.

The poll was conducted on 1,005 eligible voters from Friday to Saturday, and it had a margin of error of 3.1 percentage points with a 95 percent confidence level. 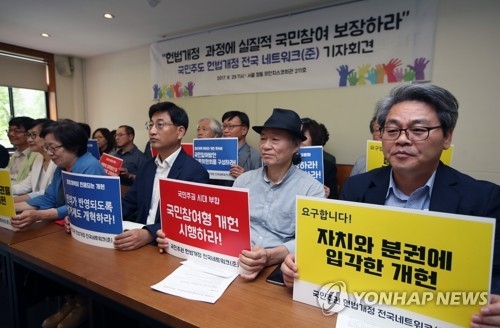 As for the content of the revision, attention is focused on how to address the current "imperial" level of presidential power, which critics argue has made past presidents vulnerable to corruption, cronyism and abuse of power.

Citizens have become acutely aware of the need to retool the governance structure in the wake of a massive corruption scandal that led to the unprecedented dismissal of former President Park Geun-hye last March.

"While watching the failure of the Park government, I came to terms with the fact that our country's presidential system was literally imperial," said Lee Jung-hyun, a 42-year-old citizen in Seoul. "I realized then we have to swiftly push for a revision for institutional improvements."

Kim Jang-won, a 37-year-old educator in Seoul, espouses a four-year presidency that allows for one re-election, as he believes South Korea's democracy is mature enough to accommodate a lengthier term for a president.

"The 1987 system, which was introduced to stop a military dictatorship from prolonging its presidency, is now out of touch with our times," he said. "As our democracy has grown mature, Korea is sufficiently capable of instituting the double, four-year presidential term."

Talk among the political class about the revision is as heated as that among the general populace.

Since the legislature launched a special panel on the amendment last January, rival parties have sparred over when and how to revise the decades-old charter though they share the need for a revision.

A major bone of contention was when to hold a public referendum on the revision.

The president and the ruling Democratic Party hope to hold a plebiscite in tandem with this year's local elections. But the main opposition Liberty Korea Party (LKP) argues that holding the two polls at the same time would run the risk of politicizing the issue and that the revision needs sufficient time for thorough deliberations.

The ruling party, which has only 121 seats in the 299-member legislature, needs the LKP's cooperation in the passage of any revision bill.

Tabling the proposal for a constitutional change requires backing from a majority of lawmakers. Passage of a bill needs support from two-thirds of the legislators. It then has to win majority support in a referendum. 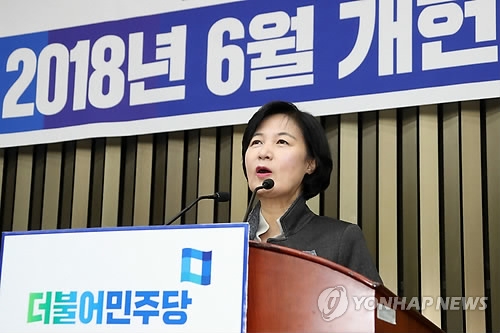 The ruling party favors a change from the single, five-year presidential term to a four-year presidency renewable upon re-election for another four years.

The lack of progress in parliamentary talks on the revision has raised the prospect of the presidential office Cheong Wa Dae undertaking the job of drafting a revision motion -- anathema to the opposition bloc.

Other issues in discussion regarding the revision include strengthening citizens' rights to safety, information and health care, and better protecting the socially vulnerable, such as children, adolescents, senior citizens and the disabled.