SEOUL, Jan. 2 (Yonhap) -- A Seoul court issued a warrant Tuesday to bring two sitting lawmakers to an arraignment to determine whether to issue arrest warrants for them on charges of accepting bribes or illegal political funds.

Prosecutors had sought the warrants to arrest the two lawmakers -- Reps. Choi Kyoung-hwan and Lee Woo-hyun of the main opposition Liberty Korea Party -- last month, but their arraignment has been postponed as they are immune from arrest while the National Assembly is in session.

On Tuesday, the Seoul Central District Court said that it will hold arraignment sessions for the two lawmakers at 10:30 a.m. Wednesday. The court also said that it issued warrants to the prosecutors to bring the two to the sessions.

The court is expected to determine whether to issue arrest warrants for them late Wednesday or early Thursday.

Choi was accused of taking 100 million won (US$91,570) from the National Intelligence Service's special activities fund in 2014, when he was concurrently serving as deputy prime minister and finance minister.

Investigators believe the money Choi received could be considered bribes because the spy agency sought his influence as a finance minister handling the government budget in its efforts to fend off opposition calls for downsizing the agency's off-the-books, special activities funds.

Lee is suspected of accepting about 1 billion won in illegal political funds from local business people. 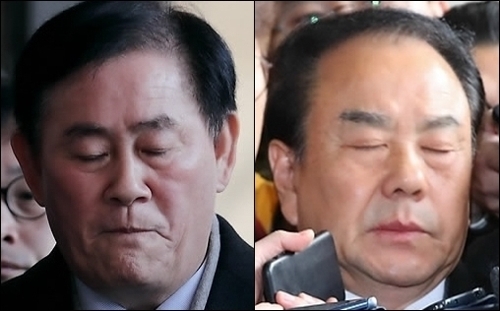