"This year will be a busier year for us, since the pace at which inter-Korean relations move forward should be met with closer coordination for our bilateral ties and standing in the global community," Foreign Minister Kang Kyung-wha told staff in her New Year speech. 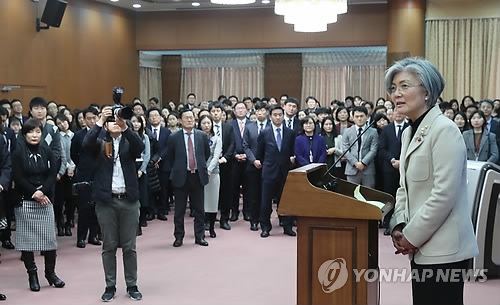 On Monday, North Korean leader Kim Jong-un expressed an intent to participate in the upcoming PyeongChang Winter Olympic Games to be held in South Korea next month and said that he is willing to have talks on the matter with the South.

In response, the South's unification minister on Tuesday proposed holding high-level inter-Korean talks on Jan. 9 in the truce village of Panmunjom in the heavily fortified demilitarized zone.

Kang quoted President Moon Jae-in as saying during a Cabinet meeting earlier in the day that the North's dialogue overture was a "positive" sign that could provide "momentum" for advancing inter-Korean relations.

But the president still noted that improving ties with the North should come together with efforts to denuclearize the North, she said.

"To that end, the president asked the foreign ministry to play an active part in coordinating with the four major powers and the international community," Kang said.

Other diplomatic challenges confronting South Korea the minister cited were the strained relations with Japan over its wartime sexual slavery of Korean women and the need to get cooperation back on track with China after a monthslong feud over the deployment of a U.S. missile defense system in South Korea called THAAD.