"It appears that South-North talks will take place for the first time in a long time," Lee said during a ceremony to kick off New Year, noting that North Korean leader Kim Jong-un spoke in his New Year's message of a need for the two Koreas to hold a meeting at an early date.

Lee said the talks, if realized, could be daunting.

"There is a sufficient possibility of North Korea demanding different treatment as it is arguing (that is now a nuclear power)," Lee said. "Nonetheless, however we have to exercise imagination and wisdom and muster courage to take advantage of this opportunity."

Lee didn't elaborate on what "different treatment" may mean, but it apparently indicates that the communist nation could demand the South treat it as a nuclear weapons-armed state. Pyongyang has carried out six nuclear tests so far and recently claimed it has become the world's newest nuclear power. 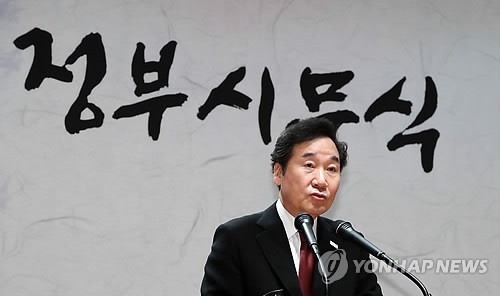 Kim Jong-un said in his New Year's address that his country is willing to send a delegation across the world's most heavily fortified border to next month's Winter Games and said the two sides could hold an urgent meeting to discuss the issue.

But he also threatened nuclear attacks on the U.S., saying the "whole of its mainland is within the range of our nuclear strike and the nuclear button is on my office desk all the time."

Referring to Kim's message, Lee said that Kim's mention of inter-Korean talks is considered a response to long-running calls from President Moon Jae-in for reopening dialogue between the two sides. But Lee also took note of the fact that the address included menacing threats.

Despite the conciliatory gestures between the two sides, Lee said the security situation around the Korean Peninsula isn't likely to change.