Earlier in the day, Unification Minister Cho Myoung-gyon proposed holding the talks in the border village of Panmunjom next Tuesday, after North Korean leader Kim Jong-un expressed willingness to join the Winter Games to be held here from Feb. 9-25.

The ruling Democratic Party welcomed the offer as a "timely" proposal, voicing hopes that the North's participation will help mend ties that have been strained by its relentless provocations.

"We expect the North to make an immediate, positive response to the (Seoul) government's timely proposal for high-level inter-Korean talks," Back Hye-ryun, the party's spokeswoman, said in her written commentary. 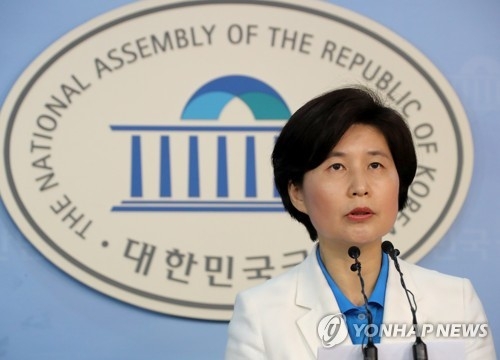 "We hope that the PyeongChang Olympics, which is about a month away, will serve to reduce tensions on the Korean Peninsula and enhance peace across the world," she added.

Back then called for the opposition parties' support for the government's efforts to improve cross-border relations.

The minor opposition People's Party struck a similar note, calling for the North to give a "sincere and positive" answer to the South's overture.

"We believe (the proposal) can greatly help the successful hosting of the PyeongChang Olympics through a reduction in tensions," Kim Cheol-kun, a party spokesman, told reporters, while cautioning against "too much expectation" over the proposed talks.

But the main opposition Liberty Korea Party said that any talks, which are not predicated on Pyongyang's denuclearization commitment, will only end up helping its nuclear program.

"We warn that clumsy inter-Korean dialogue that is not based on the premise of the dismantlement of the North's nuclear program, would only make (the South) be mired in the North's deceptive peace offensive," Chang Je-won, the party's spokesman, said.

Chang also said that Seoul should caution against the possibility of the North exploiting the dialogue to sow discord among South Koreans and drive a wedge between Seoul and Washington.

The minor conservative Bareun Party said that Seoul should be careful not to allow Pyongyang to take the initiative to turn the political landscape on the peninsula in its favor.

"(Seoul) should not allow the North to take the driver's seat in the current security landscape, as it is focused too much on its myopic goal of successfully hosting the Olympics," Kwon Seong-ju, a party spokesperson, said.