SEOUL, Jan. 4 (Yonhap) -- When South Koreans talk about skeleton, a sport in which athletes slide head-first down an icy track, most of them would probably think about Yun Sung-bin, who is currently No. 1 in the International Bobsleigh & Skeleton Federation (IBSF) men's world rankings.

While Yun will be obviously in the spotlight next month at the 2018 PyeongChang Winter Olympics, Jeong Sophia believes she can also earn fans' attention in the women's skeleton.

Jeong had been mainly racing at low-tier competitions, such as the North American Cup and the Intercontinental Cup, until last November.

In her first IBSF World Cup in Park City, Utah, on Nov. 19, Jeong finished 25th, but she is improving steadily. In her second World Cup in Innsbruck, Austria, last month, the 24-year-old took 19th place with a combined time of 1 minute, 51.01 seconds.

"At the World Cup, I felt some nerves and I couldn't think of anything," she said. "But I felt relieved because my start wasn't bad in the second heat." 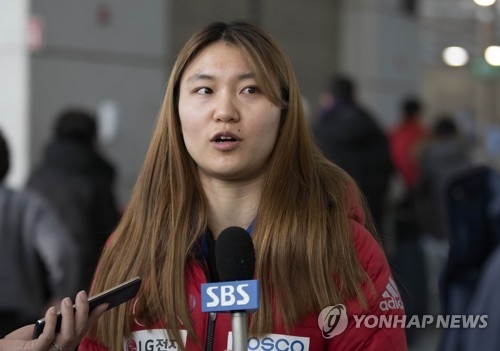 Jeong is currently South Korea's top female skeleton slider, at No. 26 in the world with 366 points. She must be inside the top 35 in the rankings to qualify for the PyeongChang Olympics when the season's seventh IBSF World Cup is completed next week in St. Moritz, Switzerland, although South Korea will be given at least one automatic spot as the host.

Jeong got her start in skeleton in September 2014 after she heard that the women's national skeleton team was looking for a slider from her university senior -- who is also a friend of men's bobsleigh team member Kim Dong-hyun.

Jeong believes that an Olympic medal is possible, since homegrown athletes have advantages. All 16 IBSF-approved tracks in the world have different course settings, meaning those who've raced many times on the Olympic track in PyeongChang will have a better chance to perform well at the upcoming Games.

Since the track at Olympic Sliding Centre in PyeongChang was fully completed in October 2016, South Korean sliders, including Jeong, have been practicing on the track whenever they had the chance, which is certainly more often than foreign athletes.

Jeong said she still needs to work hard to adapt to the Olympic track.

"I kept making mistakes when I got out of curve nine," she said. "Whenever I race, I feel it's not easy and I think I need to work harder."

Jeong hopes she is not the only woman representing South Korea at the PyeongChang Olympics. Mun Ra-young, first South Korean woman to win an international title in skeleton, is also looking to put in a surprising performance next month. Mun, 21, currently sits No. 39 in the IBSF rankings.

"I hope both of us can stand on the podium at the PyeongChang Olympics," Jeong said. 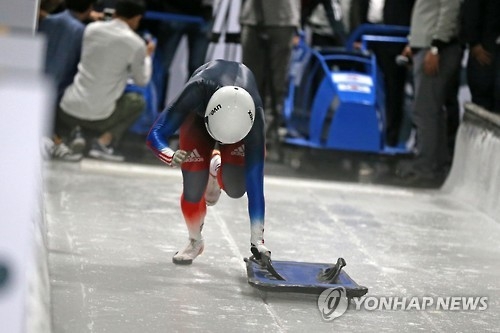