The monthly results were mainly affected by slowing growth in demand, particularly from China and the United States. Hyundai and Kia suffered the most due to sharp sales declines in the world's biggest automobile market. Sales in China were hit hard by Seoul's diplomatic row with Beijing over the deployment in South Korea of an advanced U.S. missile defense system called THAAD.

China opposed THAAD's installation on the Korean peninsula for military reasons, though South Korea and the U.S. said the anti-missile system was purely aimed at deterring missile threats from North Korea.

The two carmakers expected spreading protectionism in the U.S. and other major markets and low global economic growth trend to remain major worries for them this year.

To cope with such challenges and boost sales, the sedan-heavy carmakers said they will introduce new and upgraded sport utility vehicles in global markets. They also plan to quickly respond to local needs in each market to achieve their combined sales target of 7.55 million vehicles for 2018.

Last year, they sold a total of 7.25 million units, missing their annual target of 8.25 million.

Three other carmakers also suffered declines in the monthly sales due to weak overseas sales.

For the whole of 2017, the five carmakers' overall sales fell 6.9 percent to 8.19 million cars from 8.8 million tallied in the previous year. 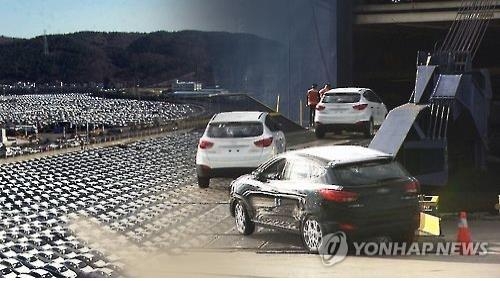