SEOUL, Jan. 2 (Yonhap) -- An aide to former President Lee Myung-bak on Tuesday denied allegations that a company supposedly owned by Lee operated a slush fund, with the prosecution having launched a special probe team to look into the suspicions.

The aide told Yonhap News Agency on condition of anonymity that Lee has nothing to do with DAS, an auto parts maker in which Lee's elder brother owns a majority stake.

Prosecutors formed a special investigation team on Dec. 22 to look into allegations that DAS has run a 12 billion won (US$11.3 million) secret fund under dozens of borrowed names, embezzled company money and evaded taxes. Lee, who served as president from 2008 to 2013, is alleged to be the real owner of the company, but the aide rejected that view.

"Has former President Lee ever owned a share in that company? Or has he received any stock dividend?" the aide asked rhetorically. "His elder brother and his brother-in-law own that company." 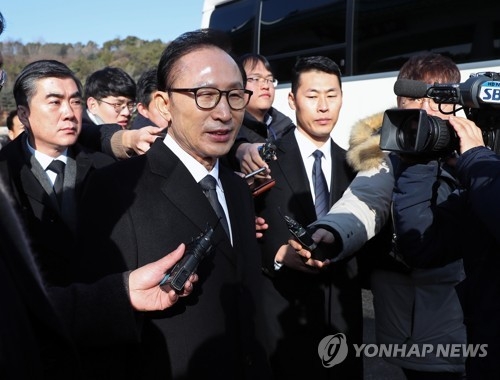 DAS was one of the biggest investors in Optional Ventures, founded by Korean-American businessman Kim Kyoung-joon. Kim was accused of rigging the stock price of a subsidiary of his former company BBK, pocketing millions of dollars in ill-gotten profits and misappropriating hundreds of billions of won in company money in the early 2000s.

Ahead of the 2007 presidential election, Lee faced allegations that he was the real owner of BBK and DAS and was therefore responsible for share price rigging. He was later cleared of the charges.

But suspicions have been rekindled recently following revelations that Lee's son was named to head several DAS factories based in China, even though he has no share in the company.

Prosecutors are accusing Lee of embezzlement, concealment of criminal proceeds, tax evasion and dereliction of duty.

But the aide pointed out that Lee has already been cleared of similar charges and said he "couldn't understand why the prosecution has dug up the case again."

"Prosecutors are investigating this based on some vague assumptions," the aide said. "This isn't something that warrants any investigation."

Some former DAS employees have apparently told prosecutors that Lee is indeed the real owner of the company, but Lee's aide said, "Those people don't know what they're talking about."

Prosecutors said the investigation will run separately from an ongoing probe into Lee's alleged involvement in DAS' suspicious recouping of its 14 billion won investment in an investment advisory firm set up by a one-time business partner of the former president.

Meanwhile, former DAS CEO Kim Sung-woo has recently returned home from Japan, and prosecutors have placed a travel ban on him. Kim, who has background in corporate finance, is accused of playing a role in managing the alleged secret fund.
(END)