A day earlier, North Korean leader Kim Jong-un said his country is open to dialogue with Seoul and could take part in the Winter Olympics in South Korea's PyeongChang next month. Kim's remarks raised hope that tensions on the peninsula could be eased following the North's repeated testing of nuclear weapons and increasingly powerful ballistic missiles.

"Sanctions and 'other' pressures are beginning to have a big impact on North Korea," Trump tweeted, referring to international sanctions over Pyongyang's nuclear and ballistic missile programs. "Soldiers are dangerously fleeing to South Korea. Rocket man now wants to talk to South Korea for first time."

He added: "Perhaps that is good news, perhaps not -- we will see!"

The U.S. president has used the derisive nickname "Rocket Man" to refer to Kim. 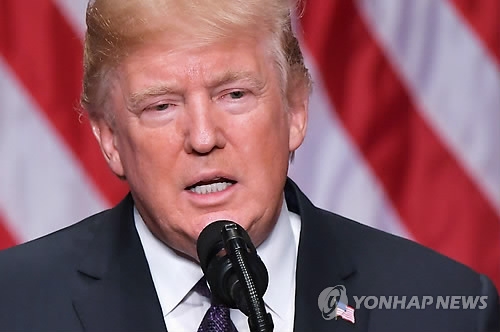 The South Korean government responded to Kim's overture by proposing inter-Korean talks next Tuesday. They would be the first such talks since December 2015 and likely center on the North's participation in the Olympics.

The Winter Games are to be held in the alpine town some 80 kilometers south of the inter-Korean border Feb. 9-25. Seoul has been keen to lower tensions with Pyongyang ahead of the event to ensure its success and pave the way for improved inter-Korean ties.

South Korean President Moon Jae-in has called for postponing annual spring exercises by the South Korean and U.S. militaries until after the games to avoid provoking the Pyongyang regime, which views the drills as an invasion rehearsal.

U.S. Sen. Lindsey Graham (R-SC) said Monday North Korea's participation in the Olympics would "give legitimacy to the most illegitimate regime on the planet."

"I'm confident South Korea will reject this absurd overture and fully believe that if North Korea goes to the Winter Olympics, we do not," he tweeted.