WASHINGTON, Jan. 2 (Yonhap) -- The United States will continue to put "maximum pressure" on North Korea to force it to abandon its nuclear weapons program, the White House said Tuesday amid the possibility of inter-Korean talks next week.

The high-level talks were proposed by Seoul in response to North Korean leader Kim Jong-un's New Year's address that signaled the regime's openness to cross-border dialogue and participation in next month's Winter Olympics in PyeongChang, South Korea.

If held, the meeting will likely center on the Olympics and take place in the shared border village of Panmunjom next Tuesday.

"Our policy on North Korea hasn't changed at all," White House press secretary Sarah Sanders said during a regular press briefing when asked if the U.S. supports the meeting. "The United States is committed and will still continue to put maximum pressure on North Korea to change and make sure that it denuclearizes the peninsula." 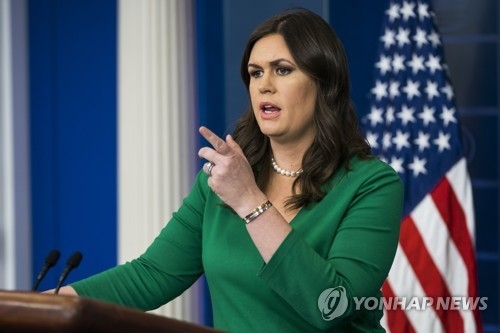 The Trump administration has carried out a "maximum pressure" campaign involving increasing economic sanctions and diplomatic isolation to force Pyongyang to come to talks on its denuclearization.

"Our goals are the same and we share that with South Korea, but our policy and our process has not changed," Sanders added.

President Donald Trump tweeted earlier in the day that sanctions and "other" pressures are beginning to have a "big impact" on North Korea. Referring to Kim, he also said "Rocket man" wants to talk to South Korea.

"Perhaps that is good news, perhaps not -- we will see!" he said.

Asked how the North's overture could be viewed as good news, Sanders stressed there is close coordination between the U.S. and South Korea.

"Our alliance and friendship with South Korea remains stronger than it ever has been. We're in close contact with those people about a unified response," she said.

The U.S. and South Korea will continue to work together to apply maximum pressure on North Korea to achieve their shared goal of denuclearization, she added, but Washington will also keep "all of our options on the table."

The Trump administration has used the phrase to include a possible military strike on the North.

On whether Washington supports North Korean athletes' participation in the Olympics, Sanders said a final determination has yet to be made.

The State Department showed little enthusiasm for the talks, which would be the first of their kind since December 2015.

"If the two countries decide that they want to have talks, that would be certainly their choice," Heather Nauert, the department's spokeswoman, said at a regular news briefing.

She noted concerns that the North Korean leader may be reaching out to the South to relieve some of the international sanctions and pressure against his regime.

"Kim Jong-un may be trying to drive a wedge of some sort between the two nations, between our nation and the Republic of Korea," Nauert said. "I can assure you that that will not happen."

Moreover, she said, "We are very skeptical of Kim Jong-un's sincerity in sitting down and having talks."

In New York, U.S. Ambassador to the United Nations Nikki Haley ripped the conciliatory gesture as nothing but a front.