SEOUL, Jan. 3 (Yonhap) -- North Korean leader Kim Jong-un seems to be seeking to weaken coordination among South Korea, the United States and China in applying sanctions on Pyongyang when he issued a New Year message, a high-profile defector said Wednesday.

Kim appears to be trying to use the country's potential participation in the PyeongChang Winter Olympics as a tool to realize this objective, according to Thae Yong-ho, a former senior North Korean diplomat.

"Kim seems to have an intention to shake the South, the U.S. and China, main key players in resolving North Korea's nuclear issue, so as to dilute their coordination over sanctions on the North," Thae said in an interview with Yonhap News Agency.

He said that Kim's speech can be summarized with three points -- extending an overture to Seoul, posing a nuclear threat against Washington and accepting Beijing's "dual suspension" proposal.

Thae defected to South Korea in 2016 after serving as a minister in the North Korean Embassy in Britain. He has become one of the highest-ranking North Korean officials to escape to Seoul. 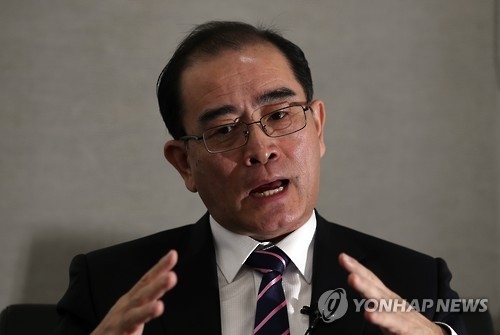 On New Year's Day, Kim said that his country is willing to send a delegation to the Olympics to be held in the South on Feb. 9-25 and is open to dialogue with Seoul over the issue.

But he warned to the U.S. that a "nuclear button" is on his desk, saying that its nuclear force is a reality, not a threat.

The speech came as the international community is tightening the screw on the North over the wayward regime's defiant pursuit of nuclear and missile programs.

Thae interpreted Kim's call for both Koreas' efforts to defuse tensions as a message targeting China.

"For the first time, Pyongyang said that it has also a responsibility for raising tensions on the peninsula. It can be viewed that the North accepted China's offer for dual suspension of North Korea's nuke and missile tests and military drills between Seoul and Washington," Thae said.

As the South and the U.S. have rejected Beijing's proposal, Kim is apparently seeking to create a fissure among the three countries over their move to further tighten sanctions on the North, he added.

"The North is likely to demand China arrange talks with the U.S. as it could insist that it has accepted Beijing's offer," Thae noted.

As to the Winter Olympics, Thae said that Kim could send a performing art and singing team to give the impression that North Korea wants to celebrate the South hosting the Olympics.

The defector saw a low possibility of Kim Yo-jong, the leader's younger sister, leading the North Korean delegation to the game.

"It is almost certain that the North's delegation will come to the South as Kim's message is an order that must be obeyed. ... But it is hard to predict who will come," Thae said. "For Kim Jong-un, it would be like a gamble to send his family member to South Korea."