The same data showed increases in other types of personal loans as well in what appeared to be a balloon effect.

Home-collateralized lending at the five leading commercial banks came to 377.79 trillion won (US$355.23 billion) as of end-2017, up 15.87 trillion won from the previous year. Mortgage loans had fallen in January and February but started to climb again from March.

The increase was smaller than the 31.93 trillion-won rise in 2016, but it took away luster from government attempts to end speculative real estate transactions. Financial authorities in August limited the amount of bank lending to owners of multiple homes, but mortgage loans increased 2.46 trillion won in August and 2.58 trillion won in September.

The government in October followed up with measures to curb household loans and an announcement in December to encourage owners of multiple homes to put up their properties for rental. Mortgage loans continued to rise by 2 trillion won each month during the period.

Personal loans rose in tandem. Credit lending at the commercial banks was registered at 97.36 trillion won as of end of last year, up 7.21 trillion won from the previous year. The increase was especially noticeable from August to December, when it gained 4.83 trillion won, suggesting that people were switching from mortgage loans to credit lending to fund their real estate investment. 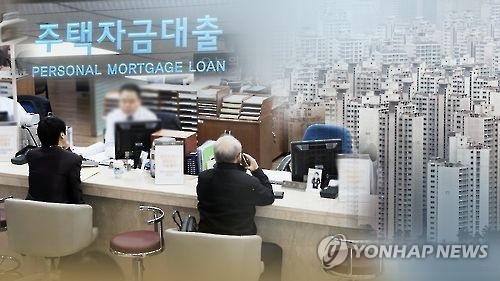