(ATTN: UPDATES with comments by CEO)

SEOUL, Jan. 3 (Yonhap) -- Hyundai Heavy Industries Co., South Korea's leading shipbuilder, said Wednesday that it aims to achieve 7.98 trillion won (US$7.5 billion) in sales this year as its president warned of an unprecedented crisis due to declining order backlogs.

"This year, we could face a grave situation that we have never gone through before," Hyundai Heavy President and CEO Kang Hwan-goo said in his New Year speech.

He warned that Hyundai Heavy could face difficulties due to dwindling order backlogs and building work for offshore plants will "completely run out in a few months."

Hyundai Heavy has not won any offshore plant orders for the past two years.

The company's 2018 sales target represents a 60 percent decline from a decade ago.

The shipyard said it is expected to post an estimated 10.03 trillion won in sales for 2017. The sales target is based on a parent base. 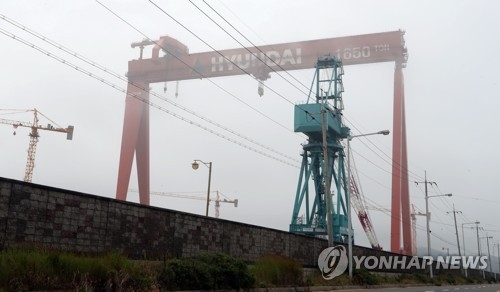