SEOUL, Jan. 3 (Yonhap) -- South Korean retail giant Lotte is facing a bumpy road as its latest negotiations over the sale of its hypermarket chain in China fell through, industry sources said Wednesday.

In September, the business group announced its decision to pull out Lotte Mart in China after it suffered major losses in the wake of the Seoul-Beijing diplomatic spat over a U.S. anti-missile system.

The conglomerate had been in talks with Thai conglomerate Charoen Pokphand Group, which runs other supermarket chains in China, but the negotiations broke down as they failed to find a middle ground over the selling price, Lotte Mart officials said.

According to the officials, the US$300 million of emergency funds Lotte injected into its Chinese retail business in late August is expected to be used up by the end of this month.

Lotte became the direct target of Beijing's retaliation after it signed a land-swap deal with the South Korean government to provide a golf course as the host site of the Terminal High Altitude Area Defense (THAAD) system.

Eighty-seven of its 112 Lotte Mart discount stores in China suspended operations, and sales at the handful of stores that managed to stay open dipped more than 80 percent.

When Beijing tourism authorities partially lifted a ban on local tourism agencies from selling Korea-bound package tours in November, they reportedly required the programs not to include visits to affiliates of Lotte Group, such as its hotels and duty-free shops. 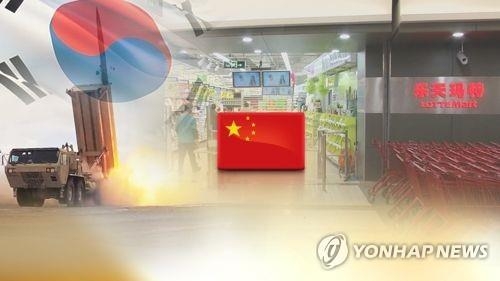