The three will tackle the reconstruction, merger and acquisition, and external cooperation-related affairs.

The state-run bank, the main creditor of the tiremaker, and several other creditors had planned to come up with measures for the reconstruction or M&A of Kumho Tire by the end of last year, but extended the deadline to the end of January.

The M&A task force was built amid reports that SK Group expressed interest in the purchase of the tiremaker last month.

Industry sources expect SK Group may be able to discuss the possible acquisition of Kumho Tire once the terms are met despite the fact it has officially dismissed the possible purchase.

"We've launched the task forces as a fresh way of resolving the issue," a KDB official said.

Nine creditors led by the KDB had been discussing the debt restructuring process while extending debt worth 1.3 trillion won (US$1.1 billion) to the end of January.

Qingdao Doublestar, a Chinese tiremaker, signed a 955 billion won contract with the KDB-led creditors to buy a 42.01-percent stake in the Korean tiremaker in March last year. The deal, however, was scrapped when creditors rejected Doublestar's demand to cut the purchase price by 16 percent to 800 billion won, citing deteriorating earnings.

The company, which earns about 22 percent of its sales from its North American operations, opened its first U.S. plant with an annual capacity of 4 million units in Georgia in 2016. Its global capacity stands at 65 million tires per year. 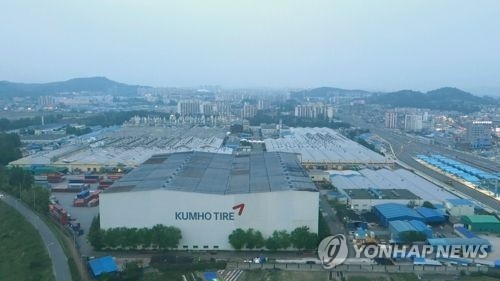