The Korea Baseball Organization (KBO) held an inauguration ceremony for its new commissioner in Seoul, as Chung replaces Koo Bon-neung, a corporate executive who had been the commissioner since 2011. Chung's term is three years.

Chung, 70, was nominated by the KBO's board of directors -- made up of the 10 club presidents, Koo and KBO's Secretary-General Yang Hae-yong -- on Nov. 29 last year. The board unanimously advanced Chung's nomination to the general assembly, made up of the club owners. And on Dec. 11, Chung earned more than 75 percent of support necessary from those owners to become the new KBO commissioner. 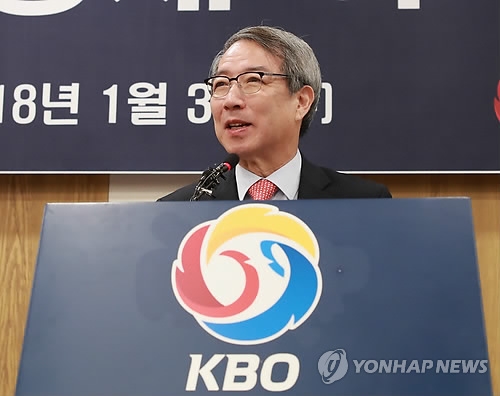 Chung served as prime minister from 2009 to 2010. Also former president of Seoul National University and professor at Columbia University, Chung is a well-known fan of baseball.

Chung is the 13th commissioner of the KBO, which was founded in 1982, and the first ex-prime minister to take the helm. His predecessors have mostly been former Cabinet ministers and corporate executives.

Chung has provided radio commentary on KBO games and penned opinion pieces on baseball for a local sports newspaper. In 2013, Chung published an essay titled "An Ode to Baseball," his attempt at portraying baseball as a metaphor for life.

In his inauguration speech, Chung spoke of his unbridled passion for baseball, revealing how his love of the game actually delayed the completion of his doctoral degree in the United States.

"Academics and the administration may have defined my career, but baseball has long been a part of my life," Chung said. "In 1989, former Yale University President A. Bartlett Giamatti served as commissioner of Major League Baseball (MLB). He'd been a lifelong baseball fan, and I am determined to work hard for professional baseball and our fans with as much love and passion as Giamatti had for the sport."

Chung is taking over a league that has enjoyed unprecedented success at the gates, with a single-season record of 8.4 million fans having attended games in 2017. But he said there's still room for growth for pro baseball here.

"I think professional baseball clubs must develop into independent business entities that can generate profits," Chung said, noting that the KBO was launched in 1982 mainly as public relations tools for the clubs' corporate owners.

"To do so, individual clubs must obviously put in their own efforts, but the KBO must also work with the clubs and find ways to grow the game together," Chung added.

Chung added he'll look to strengthen the KBO's ties with MLB and try to learn what makes the MLB such a successful league.

The new commissioner said he also wants to address the widening gap between the rich and the poor among the players -- the minimum wage is 27 million won (US$25,400) while the top stars make upwards of 2 billion won -- and added he won't shy away from making other changes as he sees fit.

Chung said by his final year in 2020, he hopes to establish KBO.com, modeled after MLB.com, as an integrated marketing channel for the entire league. 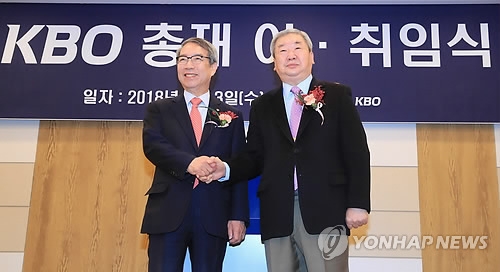