SEOUL, Jan. 3 (Yonhap) -- The leader of the ruling Democratic Party on Wednesday reaffirmed her commitment to a government campaign against "accumulated ills" despite growing resistance from the main opposition party.

President Moon Jae-in's campaign to redress graft, power abuses, cronyism and alleged election interference by state organs has taken on political overtones, as his foes have labeled it as "political retribution" against two former conservative governments.

"The Moon government will strive harder this year for the elimination of accumulated ills and to make this country worthy of being called a country," Choo Mi-ae, the party chairwoman, said during a meeting with top party officials. 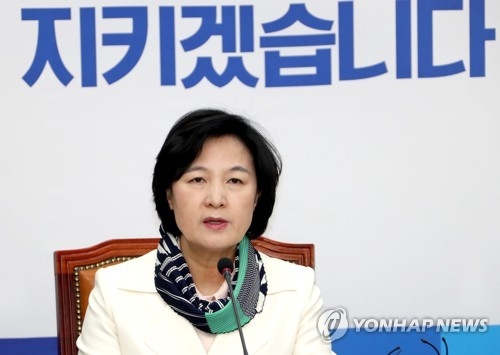 Under the campaign, the liberal administration has burrowed into a series of highly charged cases, such as the bungled state response to the 2014 ferry disaster, the spy agency's alleged election meddling in 2012 and the former governments' purported blacklisting of cultural figures deemed critical of them.

The investigations have involved several lawmakers from the Liberty Korea Party (LKP). The party thus argues that the probes are politically motivated to soil its image ahead of this year's gubernatorial and mayoral elections seen as a public referendum on Moon's first year in office.

The campaign has gained traction on the back of high public support. A recent Research & Research survey, commissioned by the local daily Dong-A Ilbo, found that 56.2 percent of the polled want Moon's fight against accumulated ills to continue without a time limit.

As Moon shifts his policy attention to enhancing the livelihoods of ordinary citizens, expectations have grown that he may soft-pedal the campaign this year to gain legislative support from the opposition bloc for his economic agenda.