SEOUL, Jan. 3 (Yonhap) -- South Korea's defense ministry said Wednesday it has not considered withdrawing troops from the United Arab Emirates (UAE) amid rampant speculation about ties between the two countries.

"The Ministry of National Defense has not reviewed the pullout of the Akh Unit," the ministry's public affairs office said in a text message for reporters.

It came in response to news reports here that the ministry had suggested South Korea withdraw the 140-strong special forces from the Middle Eastern nation by the end of 2018. The troops were dispatched in early 2011 to help train local soldiers. 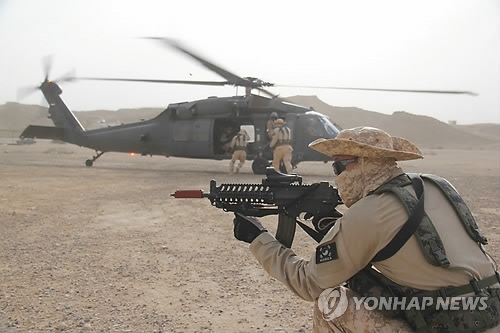 Relations between South Korea and the UAE have come under public scrutiny since Moon's chief of staff Im Jong-seok traveled to Abu Dhabi in mid-December as the president's special envoy.

Many suspect that there is a problem in the bilateral relationship, with government officials hushing up what it is.

Under the contract, worth US$18.6 billion, South Korea is building the Baraka Nuclear Power Plant, plus a $48 billion deal to run the power plant.

There's a suspicion as well that the previous Lee Myung-bak government might have signed a "secret agreement" with the UAE on military and defense industry cooperation, besides the dispatch of the Akh Unit, which is not acceptable to the current administration.

A South Korean newspaper reported that the Lee administration signed the unannounced Mutual Logistics and Service Agreement with the UAE in 2013.

Officials at Cheong Wa Dae and the Ministry of National Defense remain tightlipped about the issue.

"(The government) can't confirm relevant issues due to trust with the partner country," the ministry's spokesperson Choi Hyun-soo said at a press briefing.

In December, the National Assembly passed a motion to extend the Akh Unit's mission by another year.