SEOUL, Jan. 3 (Yonhap) -- South Korean corporate executive Koo Bon-neung wrapped up his mostly successful term as the head of the country's professional baseball league Wednesday, with the game having enjoyed unprecedented success during his six-plus years at the helm.

Koo, chairman of Heesung Group, stepped down as the commissioner of the Korea Baseball Organization (KBO) on Wednesday. Former Prime Minister Chung Un-chan succeeds Koo, who had been the commissioner since August 2011.

Koo, 68, can now begin concentrating solely on his businesses at Heesung, which sells display components to LG, knowing he leaves professional baseball in perhaps better shape than it has ever been in its 36-year history. 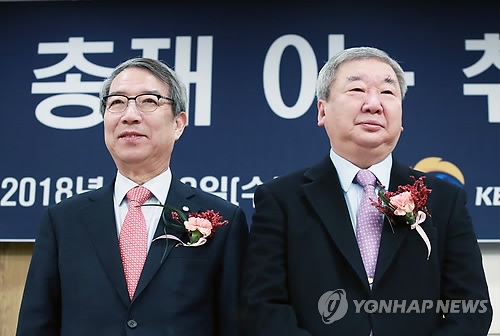 On the downside, the KBO has been rocked by match-fixing scandals in recent years, with notable players also implicated in illegal gambling, drunk driving and sexual harassment cases.

"During my six years and four months at the helm, I tried to run the KBO as transparently and fairly as possible," Koo said in his farewell speech. "Looking back on my time, I have my share of regrets. We expanded to 10 clubs, and we've drawn more than 8 million fans in each of the past two years, but I think we still have our work cut out for us to grow baseball as an industry."

Koo said he is happy to be leaving the league in good hands.

"I have no doubt in my mind that Commissioner Chung, who has great passion for baseball and tremendous leadership, will do an outstanding job in my stead," Koo said. "I ask everyone in baseball to work together and help elevate the KBO to the next level."

Chung also paid his tribute to Koo in his inauguration speech, saying Koo deserves much credit for the KBO's growth in recent years.

"It seemed impossible that we'd expand to nine or 10 clubs, but Commissioner Koo's leadership made it possible," Chung said. "I'd like to pay my respects for his accomplishments at the helm of the KBO."