SEOUL, Jan. 3 (Yonhap) -- Thailand is the most popular winter training destination for South Korean pro football clubs this year, according to data released by the league operator Wednesday.

The K League said half of the first division K League Classic clubs will begin their winter training in Thailand this month to prepare for their new season campaign. The 2018 season of the Classic is scheduled to kick off March 1.

Jeju United, the 2017 season runners-up, and Incheon United will set up their training camps in Chiang Mai, Thailand, while Pohang Steelers and newly promoted club Gyeongnam FC will stay in Bangkok. Gangwon FC and Jeonnam Dragons will also kick off their offseason training in Thailand, the K League said.

Among second division K League Challenge clubs, Seongnam FC, Suwon FC and FC Anyang will fly to the Southeast Asian nation this month for their new season preparations, according to the K League.

The league office said only two Classic clubs will set up their winter training camps in Europe. FC Seoul, which finished fifth in the Classic last year, will be in Spain from Saturday to Feb. 7, before they move to Kagoshima, Japan, for another overseas training program. Ulsan Hyundai, last season's fourth-place finisher, will begin their preseason tuneup in Algarve, Portugal, between next Wednesday and Jan. 30.

Suwon Samsung Bluewings are the first club to start their preparations for the new season. They've set up a training camp on Jeju Island on Wednesday and will stay there until Jan. 24. Suwon, which finished third in the 2017 season, are scheduled to play their Asian Football Confederation Champions League playoff match Jan. 30.

Reigning Classic champions Jeonbuk Hyundai Motors will travel to Okinawa, Japan, for their winter training, while Daegu FC will fly to Kunming, China. Sangju Sangmu, the military football club, will train in Guam this month.

Busan IPark FC and Seoul E-Land FC will have their winter training in Kunming, China. Ansan Greeners, Bucheon FC and Asan Mugunghwa FC will be the only three second-division clubs that will not train overseas this winter, according to the K League. 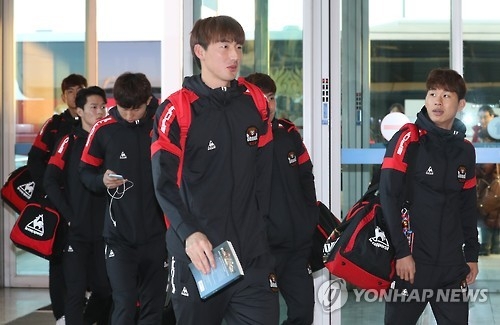