"Over the past few years, our shipbuilding industry has been experiencing the worst recession in its history due to a drop in global orders," the president said while visiting a local shipyard in Geoje, located some 450 kilometers southeast of Seoul. 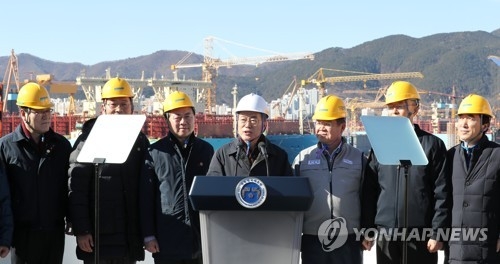 "However, I believe in the strength of our shipbuilding industry that has world-class technology and competitiveness. The world's first LNG-powered ice-breaking cargo ship built with our own technology proves this fact," he added.

Wednesday's trip marked the first one by the president to an industrial facility in the new year. The shipyard apparently was his choice of destination as the shipbuilding industry, once the country's leading exporter, has suffered great setbacks over the past couple of years.

The country's three largest shipbuilders posted a combined loss of 8.5 trillion won (US$7.98 billion) in 2015 alone.

"First, let us join our forces to overcome this downturn. The government will provide its full support to help (local shipyards) secure more orders for new ships, starting with LNG tankers," Moon said, adding the government will also increase its own orders for ships for public use.

"We will also push for measures to enhance the competitiveness of our shipbuilding industry in the future. Environmentally friendly, autonomous driving technologies will become new growth engines," he said.

In particular, the government will come up with special measures for "innovative growth of the shipbuilding industry" before the end of the first quarter, the president added.