And it's perhaps the academic in him that envisions the 10 clubs in the Korea Baseball Organization (KBO) developing into successful business entities.

Throughout his inauguration ceremony, Chung stressed the need to turn individual clubs into profitable business organizations, so that professional baseball, already the nation's most popular sport, can achieve an even longer-term success. 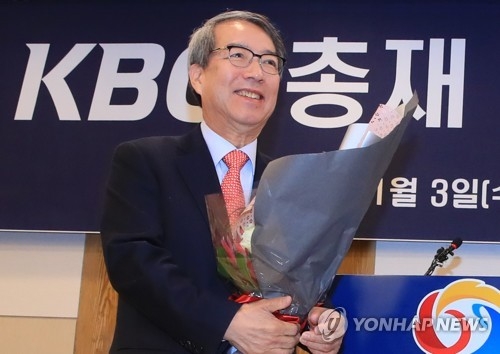 To that end, Chung said he hopes to pick brains of Major League Baseball (MLB), which continues to generate record revenues, and ultimately launch KBO.com as an integrated marketing avenue modeled after MLB.com.

MLB.com functions as the official website of MLB and is run by MLB Advanced Media. It's a one-stop source of news for all 30 big league clubs and offers live video and audio streaming for paying subscribers.

"I think it's important for us to generate profits through KBO.com, much the way MLB has done with MLB.com," Chung said. "I understand that teams haven't exactly been cooperative on that front so far."

The KBO teams have enjoyed unprecedented success at the gates in recent years, and have set new single-season attendance records in each of the past two years, capped off by 8.4 million fans in 2017. Most of the clubs are owned by business conglomerates and they constantly bleed red in the books.

Chung also called on help from regional authorities in home cities of KBO clubs. Teams have to pay substantial amounts of rent to use their stadiums, which are owned by the regional governments, and must also share revenues from advertisements on outfield fences with the authorities.

"I just think it's wrong for the regional governments to be taking so much in rent," Chung said. "When KBO teams play at these stadiums, they bring so much joy to local residents. I think these governments should be grateful for that." 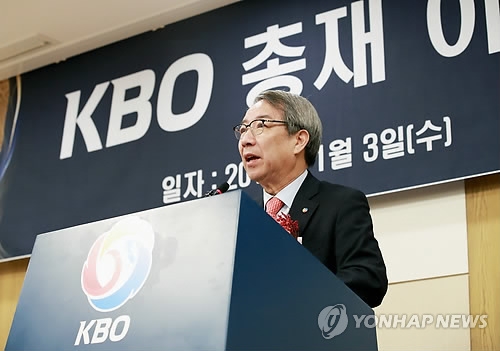 Also to help ensure baseball's growth into a business entity, Chung has offered to be paid for his work as the commissioner. His two predecessors, Koo Bon-neung and You Young-koo, were not paid for their services, though the difference between them and Chung is the two were already successful corporate executives.

"I don't have any other source of income, and I'll try to earn my keep here," Chung quipped.

Turning more serious, Chung added, "I think I will do enough work here to deserve my pay and I'll also gladly take incentives. I don't think people are ready to pay for the services that they receive. And my action will be the first step to help turn professional baseball into an industry."

Chung's love for baseball has been well documented. Though he dabbled at playing the game as a child, Chung said he realized quickly he would never be good enough to be a pro. He instead began devoting his energy into watching the game -- so much that it cost him a year in getting his doctoral degree at Princeton.

Chung has even thrown out the ceremonial first pitch at Rogers Centre, home of the Toronto Blue Jays, and when asked to list his favorite baseball memories, a historic moment from the 1977 World Series between the New York Yankees and the Los Angeles Dodgers came out on top for Chung.

"I remember watching Reggie Jackson of the Yankees hit a home run in Game 5, and then launch three more in Game 6," Chung said. "So that was four home runs in two games in the World Series. That was really impressive."