CHUNCHEON, South Korea, Jan. 3 (Yonhap) -- The Gangwon provincial government, organizer of the upcoming PyeongChang Winter Olympic Games, has expressed an intention to send a cruise to a North Korean port to transport a delegation if the country decides to join, a provincial official said Wednesday.

In his New Year's Day address, North Korean leader Kim Jong-un indicated the possibility of sending a delegation to the South Korean event.

Indeed, the eastern province has long endeavored to realize the North's participation in the Olympics that will open in its mountainous alpine town of PyeongChang.

To contact North Korean officials, the province participated in an international youth football championship in the Chinese city of Kunming late last month, which the North also joined.

Choi told Mun that he hopes the North will dispatch a cheering squad and high-level officials as well as athletes to the Olympics, the official said.

On Choi's wish, the chairman was cited as saying, "We'll make a comprehensive report (to our leader), and make efforts to give a favorable reply."

In particular, Choi offered to send a cruise to the North's eastern port of Wonsan to transport the delegation to the South Korean provincial port of Sokcho. Wonsan has the massive Masik Ski Resort, where the North's delegation can hold a launching ceremony for the Olympics. The resort was built in 2014 as a pet project of the North Korean leader.

The conceived 20,000-ton cruise can accommodate up to 1,000 people with some 390 rooms, and thus can be used as the delegation's lodging during the Olympics, the official said.

Choi and Mun also agreed to continue inter-Korean sports exchanges at the meeting.

As a result, Gangwon FC, a professional football team based in the province, and an April 25 football team will hold matches in Kunming on Jan. 15 and in the North Korean capital, Pyongyang, in June, the official said. In addition, Mun promised to send a team to an international youth football competition set for October in the South Korean province. 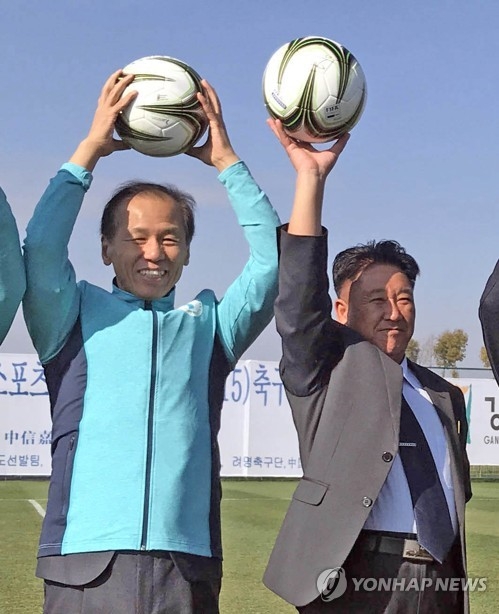