SEOUL, Jan. 3 (Yonhap) -- South and North Korea made their first contact via a cross-border communication channel in nearly two years on Wednesday as the North reopened the suspended hotline one day after Seoul offered high-level talks.

North Korea announced earlier in the day that its leader, Kim Jong-un, ordered the reopening of the channel at the shared border village of Panmunjom.

It came after Kim extended an overture to Seoul on New Year's Day, saying that his country is willing to send a delegation to the PyeongChang Olympics to be held in the South next month.

In response, South Korea proposed high-level discussions on Tuesday over the North's potential participation in the games and ways to improve ties. It said it is open to talks "at any time, in any place and in any format."

"By upholding a decision by the leadership, we will make close contact with South Korea in a sincere and honest manner," said Ri Son-gwon, the head of North Korea's agency handling inter-Korean affairs, according to its state-run television station. "We will discuss working-level issues over our potential dispatch of the delegation." 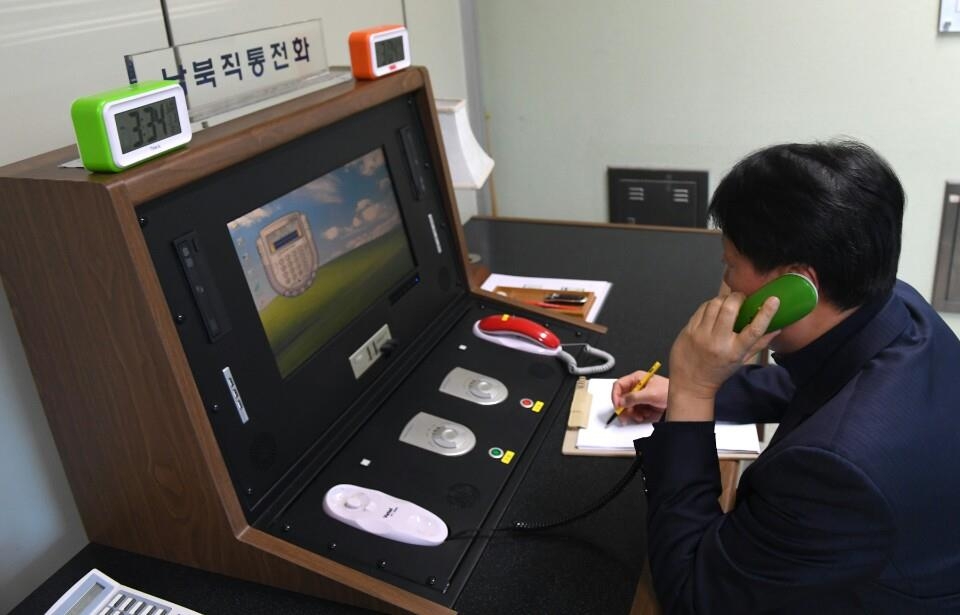 North Korea closed two inter-Korean communication channels -- a hotline installed at the liaison office at the truce village and a military channel -- in February 2016 in protest at Seoul's shutdown of a joint industrial complex.

They had not been physically severed, but the dialogue channel was not operating by virtue of North Korea's lack of response to South Korean officials' daily attempts at contact by phone.

"A North Korean official first contacted the South side via the channel," said South Korea's unification ministry. Both sides talked for 20 minutes to check for technical problems.

The resumption of the liaison hotline indicates a step forward in improving long-stalled inter-Korean ties despite North Korea's nuclear and missile provocations.

After a nine-year rule of two conservative governments, liberal President Moon Jae-in, who favors engagement with Pyongyang, took office in May last year. But the North's continued nuclear and missile threats have prompted him to maintain the dual-track of seeking sanctions and dialogue.

Seoul hopes that better inter-Korean relations could help pave the way for the resolution of North Korea's nuclear issue and broader talks between the U.S. and North Korea.

The North's leader extended the rare rapprochement toward Seoul while maintaining his country's nuclear threat against the United States.

Kim "highly appreciated and welcomed" Moon's support of his peace offer, according to Ri.

"The leader stressed that whether inter-Korean ties can be improved totally depends on North and South Korea," the official said.

But Ri did not specify whether the country would accept the format of high-level talks proposed by Seoul.

"We will consult with North Korea over working-level issues in connection to our dialogue offer through the hotline," South Korea's unification ministry said in a statement.