BUSAN, Jan. 5 (Yonhap) -- Rm. Palaniappan, an artist of great stature in India, concentrated fully on his work during his two months in the South Korean port city of Busan. He has been a resident artist around the world, including the United States, Britain and Germany, but it was the first time that he created artwork in South Korea. 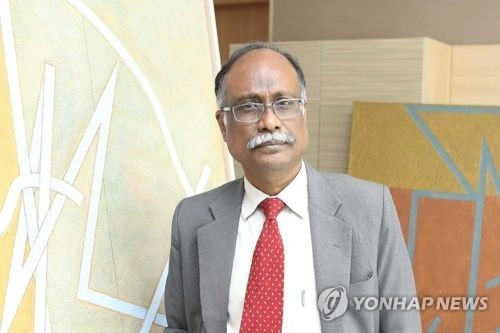 Palaniappan is broadly recognized in India and elsewhere for pieces that implicate line, color, time, space and the movements of the universe. His works are frequently seen at auctions like Christie's, Sotheby, Osian's, Bonhams and Bid & Hammer. They are also hung at the British Museum, Victoria and Albert Museum, Oxford University, Cincinnati Art Museum, U.S. Congress and the Lalit Kala Akademi in New Delhi. 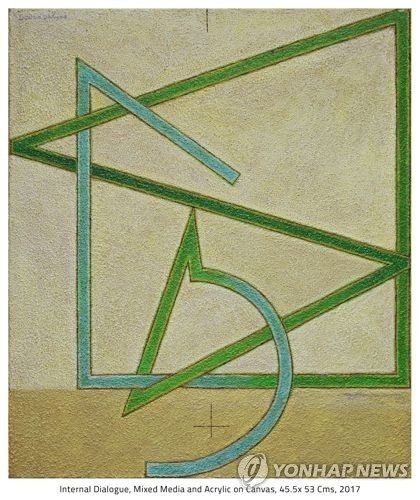 Palaniappan came to South Korea at the end of October on an invitation from K-Art. Since then, he has spent most of his time in Busan some 453 kilometers southeast of Seoul, except when touring Korea's historic sites.

Yonhap met up with him on Dec. 28 at a studio in the city, where he was finishing his latest work.

"I concentrated my senses not simply on producing a piece from a feeling, but melting a new feeling into the new piece," Palaniappan said. "It is important to express emotions in the artwork, but I think people around me give me credit for my effort to find the core and the root." 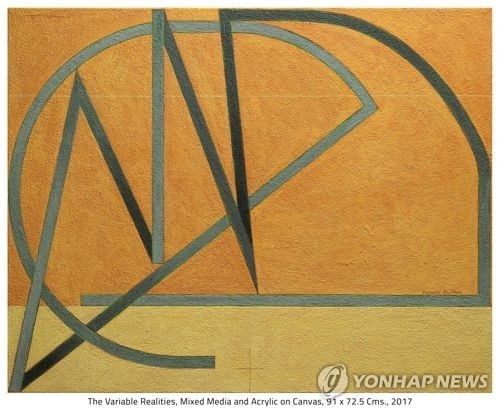 Palaniappan was born in 1957 in Tamil Nadu. He was born into a family that was in the art business, exposing him to art naturally.

He majored in painting at a fine arts university, received a master's degree in industrial design (ceramics), and went to the United States in 1991 to study lithographic printing. In 1996, he went to Oxford University as a residence artist.

Palaniappan has accepted awards in India, Britain and the U.S. and has received invitations from a host of foreign institutions, including Australia's Department of Foreign Affairs and Trade. He also served as the head of the Lalit Kala Akademi, India's National Academy of Art in Chennai.

Palaniappan said he has liked mathematics and physics since he was a child. He took interest in time, space and light and turned mathematics and geometry into visual forms. He says he built his experience from doing a number of works, and he now believes inspiration is more important since getting interested in expressing the philosophical root of the universe with the visual tool of lines.

His notes are full of geometrical shapes that at first glance are unfathomable. 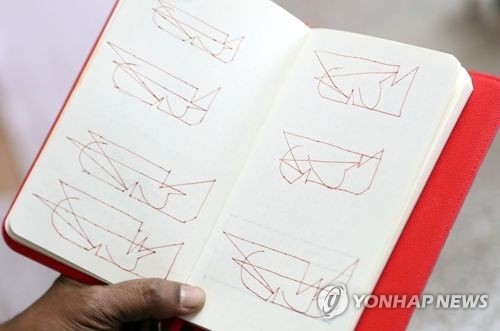 "There are more than 10,000 pages of drawings that came to my mind after I came to Busan," Palaniappan said. "This drawing process is more important than the finished pieces."

Palaniappan completed 10 works of art inspired by his visits to different places in South Korea during his two-month residency.

Asked to assess Korean and Indian art, he drew the comparison that both are based on tradition and are experimental. "They are different in accepting the inspirations and expressing them because of the differences in the two countries' culture and lifestyle," he said. 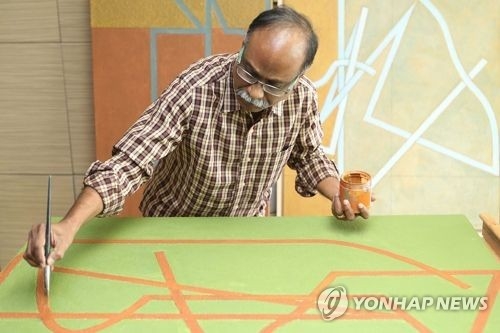 Palaniappan participated in the Busan International Art Fair exhibition hosted by K-Art last month. "Exhibits disappear after a few days. What's important is embracing them inside your mind," he said, adding that he wished for other Indian artists to have experiences in Korea like his.

Palaniappan left South Korea on Wednesday and is due to return in April and October for exhibitions in Seoul and Busan.
(END)