SEOUL, Jan. 3 (Yonhap) -- Political parties on Wednesday welcomed Pyongyang's decision to reactivate a stalled inter-Korean communication channel, hoping it would lead to a thaw in cross-border ties that have remained chilled amid the reclusive state's provocations.

Some conservative parties, however, struck a cautious note, raising the possibility that the communist state could take advantage of the inter-Korean dialogue to stall for time to complete its nuclear program.

Earlier in the day, the North's state media said Pyongyang would reopen the dialogue line at the border village of Panmunjom in the afternoon. The move came a day after Seoul proposed high-level talks with it over its participation in the PyeongChang Winter Olympics next month.

"We hope that (the reopening of the communication line) will serve as a turning point in inter-Korean relations," Back Hye-ryun, the spokeswoman of the ruling Democratic Party, said in a written commentary. 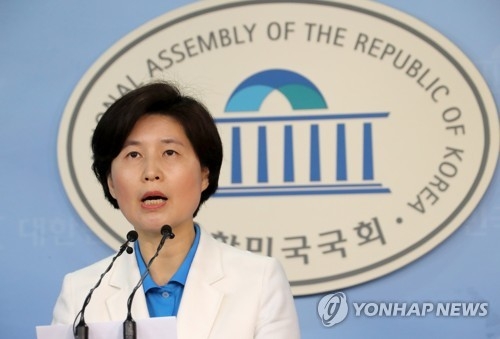 Back noted that the North's latest gesture was an outcome of the liberal Moon Jae-in government's "sincere" efforts to mend fences with the North.

"We anticipate that (the reopening of the channel) will lead to practical, continued dialogue for reducing tensions on the Korean Peninsula and improving relations between the two Koreas," Back said.

The minor opposition People's Party also welcomed the North's decision, but stressed that any dialogue should be based on mutual "veracity and trust."

"North Korea, in the past, dashed our hopes (for peace), as it made public statements calling for peace while preparing for missile launches and stalling for time to complete its nuclear force," Lee Heang-ja, the party spokeswoman, said.

"Such a disguised peace offensive should never be repeated again," she added.

The conservative Bareun Party positively commented on the reopening of the communication line, but cautioned against "groundless" optimism.

"We basically welcome it. We hope that it will serve as a conduit for the reduction of tension and the successful hosting of the PyeongChang Olympics," Kwon Sung-ju, a party spokesperson, said.

The main opposition Liberty Korea Party (LKP) reiterated that any dialogue with the North must be predicated on a denuclearization commitment from it. It also warned that the North could make excessive demands based on its fast-advancing nuclear weapons capability.

"(Seoul) must not engage in any humiliating dialogue or negotiations that are designed only to have the North participate in the Olympics," Choung Tae-ok, the party's spokesman, said.

The LKP has argued that the North might use inter-Korean talks to sow discord among South Koreans, drive a wedge between Seoul and Washington and blunt the momentum for international sanctions against it.