SEOUL, Jan. 4 (Yonhap) -- Sun Pil-soon has seen many people around her, including a sister, a cousin and an aunt, living on respirators for as long as 10 years with little chance of recovery before their deaths, an ending that she wants to avoid.

What makes such bedridden lives harder is the huge financial burden that family members have to shoulder to keep their loved ones alive, said the 62-year-old, after filling out a form expressing her intent to forgo CPR, respirators and other emergency treatments if she falls terminally ill.

"I've seen many people around me who had been perfectly fine abruptly collapse and live on respirators for a long time," Sun said. "This is a burden not only to themselves but also to their children. What's the point in living like that when they don't even have feeling?"

Sun is among more than 4,000 people who have signed up to forgo "meaningless extension of life" by refusing four major life-sustaining treatments -- CPR, artificial ventilation, hemodialysis and anticancer drug administration -- in case they enter an irrecoverable dying process.

Refusing such treatments so that patients can "die with dignity" became legal under a law that is set to go into effect on Feb. 4. Ahead of the law's implementation, in late October the government began accepting advance applications to forgo life-sustaining treatments.

The government is building a national database of such applications, which doctors can refer to when deciding whether to continue to put their terminally ill patients on machines to keep them alive or to let them pass away according to their will.

Applicants can also access the database to view or change their preferences.

Just two months after the government began accepting such "advance medical directives" at only five locations across the country, more than 4,000 people signed up to refuse life-sustaining treatments, either all or selected forms of the four treatments.

The high number of refusals reflects how much South Korean society is interested in ending meaningless extension of life.

The number of applicants is expected to spike after the law takes effect next month.

"There has been high demand from citizens for the law," Ban Yoon-joo, a health ministry official in charge of the issue, said of the reason for the legislation, adding that surveys have shown absolute majorities of people -- about 90 percent among the elderly -- supporting ending the meaningless extension of life.

Support among patients was even higher, with 92 percent in favor, according to a 2013 survey, she said. 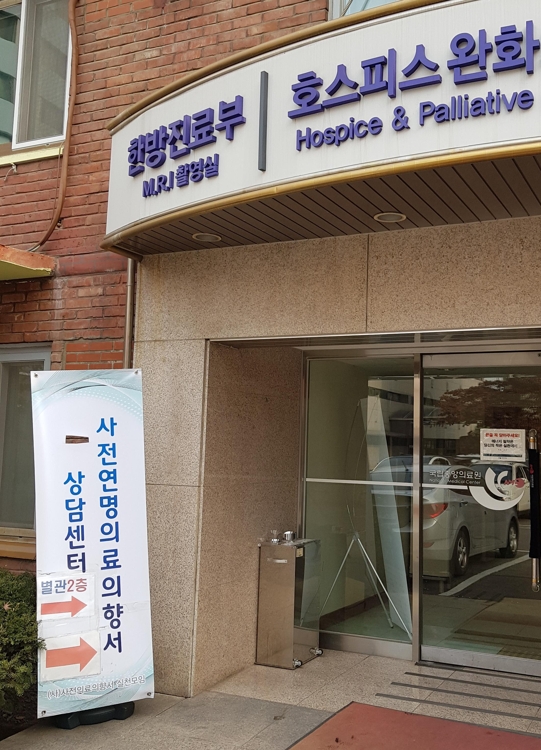 Earlier this week, one such application center, located at the National Medical Center in central Seoul, was bustling with elderly people visiting to fill out the advance medical directive renouncing life-sustaining treatments.

"I think we have to do this as a matter of course. This is not only for me, but also for family members and children who are left behind," said a 75-year-old woman, who identified herself only by her surname, Chung. "I hope my children won't hesitate or have a hard time (deciding to discontinue life-extension treatments for their mother). I signed up to refuse all four treatments."

Chung said she was happy to learn she can make such decisions before she becomes ill.

"I'm pleased and am feeling like I've put down a heavy burden," she said. "I'm grateful that I've lived a good life so far and I don't see any point in doing (life-sustaining treatments) when there is no chance of survival."

Choi Young-eui, a "well-dying" counselor at the center, said about 30-40 people visit the center every day, and most of them have experiences of witnessing their parents or other relatives suffering while living on life-sustaining treatments.

"What they want is to die without having a hard time," Choi said.

Even before the legislation, it has been possible to discontinue such life-sustaining treatments under a Supreme Court verdict in 2009 that allowed for taking a respirator off a terminally ill patient who was in a persistent vegetative state.

The patient's family filed the suit as doctors rejected the family's request to take the respirator off her so that she could die with dignity. The highest court ruled in favor of the family, saying that life-sustaining treatments when there's no chance of recovery impair a human being's dignity and value.

The patient, identified by her surname Kim, died about eight months later.

Despite the so-called "Grandmother Kim" case, most doctors still refused to discontinue life-support treatments due mainly to fears of punishment stemming from another court ruling that convicted a doctor of being an accessory to homicide for taking a respirator off a patient per a family request. The patient's wife was convicted of homicide.

The 1997 case at Boramae Medical Center in southern Seoul had deep repercussions in the medical community, with doctors refusing to discharge patients or suspend life extension treatments for fear of criminal punishment, even after the 2009 "Grandmother Kim" case.

As part of the pilot project since late October, the government not only accepted advance medical directives, but also allowed doctors to withhold life-sustaining treatments for dying patients according to their will, leading to seven deaths.

Once the law takes effect, it will be possible not only to withhold such treatments, but also suspend ongoing treatments, even when a patient's will is difficult to confirm, if all family members -- direct ancestors and descendants -- agree. In addition, consent must be gained from at least two doctors.

"What I want is that if I collapse, I hope I would pass away right away," Sun, the 62-year-old, said. "I hate living on a machine. That's a burden not only to myself, but also to my children. I suspect no one would want to live like that." 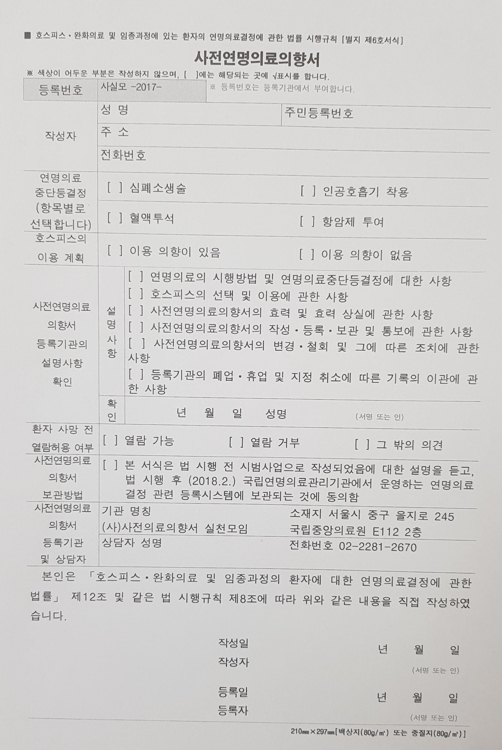