The Seoul Central District Court approved arrest warrants for Reps. Choi Kyung-hwan and Lee Woo-hyun of the main opposition Libery Korea Party, each on charges of bribery and violating the political fund law. The court acknowledged that the suspects present the risk of flight and destroying evidence.

Choi, 63, stands accused of accepting 100 million won (US$93,720) from the state spy agency in 2014 when he was then deputy prime minister and finance minister. The opposition bigwig is also known to be close to ousted President Park Geun-hye. Park is also facing an additional indictment for the same charge as Choi's on top of a string of other corruption charges.

Prosecutors believe that the National Intelligence Service (NIS) provided former top government officials with billions of won from its state coffers, including some 3.8 billion won to Park from 2013-2016.

Choi has flatly denied any wrongdoing, saying that he would "disembowel" himself with a knife in public if the allegations were true.

Lee, 61, is suspected of accepting about 1 billion won in illegal political funds from local business people in return for business favors and a city council member seeking his influence to win a mayoral candidate nomination. Lee has also denied the charges.

The court held arraignment hearings for the two lawmakers on Wednesday, a few weeks after the prosecution filed for the warrants as they had the immunity from arrests while the National Assembly was in session. 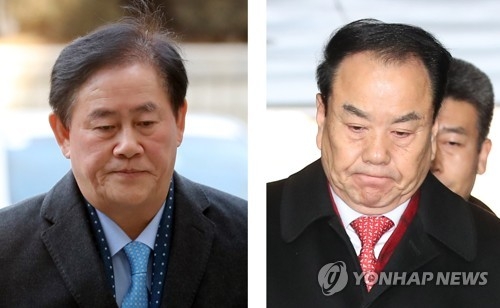