In an interview with U.S. broadcaster Voice of America, Pence said the president's leadership on the world stage has resulted in "measurable progress," especially on the issue of North Korea's nuclear and ballistic missile programs.

Trump, who has exchanged a series of threats and insults with the Pyongyang regime since last year, tweeted late Tuesday that he, too, has a "nuclear button" that is "much bigger and more powerful" than the one North Korean leader Kim Jong-un has.

It was a response to Kim's New Year's speech in which the young leader warned the U.S. that he has a nuclear button on his desk at all times. 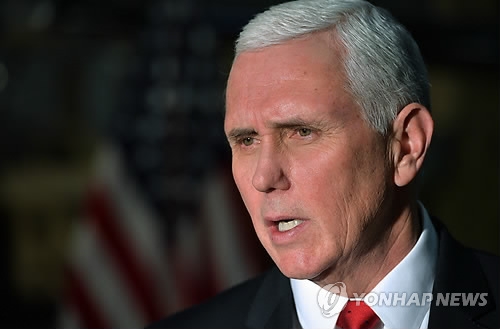 "In the message the president sent -- in the wake of Kim Jong-un's New Year's message, where, while on the one hand he talked about wanting to reach out to his neighbors to the south, it's the same moment he spoke of having missiles that could reach the United States and having a button on his desk -- President Trump made it clear: America will not be bullied, America will not be threatened, and that the United States of America has, by being clear, managed to marshal an unprecedented amount of economic and diplomatic pressure on North Korea," Pence said, according to a White House transcript of the interview.

"And after decades of North Korea stalling and ignoring the world community and continuing to develop nuclear and ballistic missiles, we're now literally beginning to see some movement among nations in the region," he added.

The U.S. has led a "maximum pressure" campaign of tightened economic sanctions and diplomatic isolation to force the North to come to talks on its denuclearization. Last year, the U.N. Security Council adopted three sets of sanctions to punish the regime for its banned tests of intercontinental ballistic missiles and its sixth nuclear detonation in September.

Analysts believe it is only a matter of time before Pyongyang attains its goal of building a nuclear-tipped ballistic missile capable of striking anywhere in the U.S.

Pence gave some credit to China, North Korea's only major ally and biggest trading partner, for "doing more than ever before" to isolate its neighbor.