SEOUL, Jan. 4 (Yonhap) -- The local fantasy blockbuster "Along With the Gods: The Two Worlds" surpassed 10 million in attendance Thursday, becoming the 16th Korean film ever to reach the milestone, its distributor said.

Lotte Entertainment said the film had reached a cumulative audience of 10,000,198 as of 12 a.m. Thursday, on the 16th day of its run. The figure included the number of tickets reserved for the day. 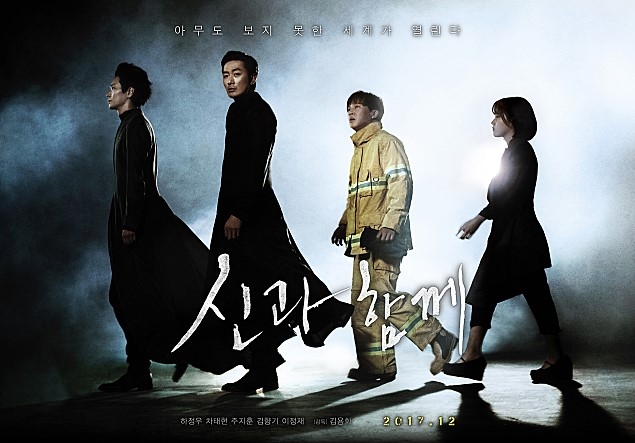 It became the second film to pass the threshold after "A Taxi Driver," also a domestic title, and the 16th of all Korean movies and 20th when foreign films are included.

A movie that has sold more than 10 million tickets is considered a huge box-office success in Korea.

The first installment of a two-part series based on a famous webtoon of the same title by Joo Ho-min, "Along With the Gods: The Two Worlds" is about a righteous firefighter who is judged in seven hells for 49 days after death, guided by three grim reapers. It was directed by Kim Yong-hwa of "200 Pound Beauty," "Mr. Go" and "Take Off," and stars Ha Jung-woo, Ju Ji-hoon and Kim Hyang-gi.

"Gods" has topped the box office for more than two weeks in a row since its release on Dec. 20.

The film crossed the 10 million milestone in the second fastest time ever after "Roaring Currents," the top-selling film of all time. The previous No. 2 was shared by "Train to Busan" and "A Taxi Driver." It took 19 days for them to hit the milestone.

"I'm pleased to be able to communicate with many people, most of all," the director Kim said in a press statement released by Lotte Entertainment. "I'll try to live up to your expectations by making the second installment well, and I hope this movie will warm you up."

'Along With the Gods' breaks 10 mln mark in attendance

'Along With the Gods' breaks 10 mln mark in attendance